The 2P16 is a mobile rocket artillery system used by both East German and Polish military forces in ArmA 3. It was added with the release of the Global Mobilization - Cold War Germany Creator DLC.

The 2P16 is a mobile short-range ballistic missile (SRBM) system that is mounted onto the chassis of the PT-76 light tank.

Armament
The 2K3 Luna launch complex can be armed with two types of short-range ballistic rockets:

By default, the Luna's rail only has a single non-nuclear 3R9 HE rocket. Rearming the Luna requires support from logistics as the launch vehicle does not carry any spare rockets.

Features
A powerful but outdated mobile SRBM, the 2P16 forms one component of the overall 2K3 Luna launch complex. Its rockets have an operational range of approximately 40 kilometres. When deployed in unison with another launcher vehicle, a battery of 2P16s can effectively "delete" entire grid sectors in a single barrage.

Mobility
In spite of the Luna rail's size and the weight of its rocket, the 2P16 handles quite well and can match the PT-76B's top speed of 51 km/h. However, it should be noted that although the 2P16 shares the PT-76B's chassis, it does not retain the latter's amphibious capability.

Notable Traits
When armed with its unique 3R10 tactical nuclear rocket, the 2P16 can wipe out half of a grid sector in one strike.

Anything caught in the blast radius stands no chance of surviving the explosion. Likewise, structures and foliage at ground zero will be completely obliterated, allowing for friendly forces to move in without having to deal with terrain obstacles.

Drawbacks
Lacking a means to reliably protect themselves with, 2P16s are defenceless on their own since their rockets can't be feasibly employed in direct fire due to its minimum firing range of ten kilometres.

Each launcher vehicle is also restricted to firing only one rocket at a time as it has no spares to "reload" from. In stark contrast, 2S1/BM-21 batteries can operate on their own for a time if the situation requires it. 2P16s on the other hand, require both an armed escort and logistics trucks to accompany them at all times.

Combined with a painfully long rearming time for the launcher and the risk of inflicting mass casualties upon friendlies should they happen to be close to the impact area, the 2P16 doesn't have any real practical uses. It should only be employed to destroy strategic targets hiding behind enemy lines, and shouldn't be used to hit mobile targets.

Crew Capacity
The 2P16 supports a crew of two that consists of the driver and a gunner who doubles as the vehicle's commander. No passengers may be seated inside or outside the launch vehicle. 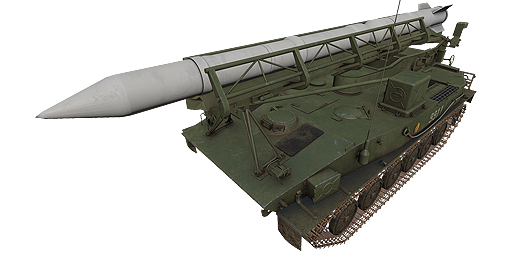 East German designation for the 2P16. With the exception of applicable camouflage schemes, it is completely identical to its Polish counterpart.

The 2P16 has a base armour value of 600. It cannot be fitted with addon armour modules.

The following highlighted positions serve as weak points on the 2P16:

Note that although the primary weak point on the 2P16's hull is concentrated around the frontal half of the hull, it actually extends to the rear half as well.

The hull is able to withstand up to 960 points of damage. It takes 80% less damage from high-explosive (HE) type munitions.

It takes full damage from incoming sources and takes a further 60% additional damage (totalling to 160%). Depletion of the hull's integrity will always result in a catastrophic kill.

The engine can only take 270 points of damage before failing. It reduces up to 80% of damage from HE-type munitions. No damage inflicted upon the engine will be shared with the 2P16's main "health" pool.

If damaged: Cuts power output and acceleration.
If destroyed: Immobilises the 2P16.

The fuel tanks are only able to survive up to 150 points of damage before they rupture. They only reduce 40% of damage from HE-type munitions. No damage inflicted upon them will be shared with the vehicle's "health" pool.

In all cases, no damage inflicted onto any of the components will be shared with the vehicle's main "health" pool.

The gunner exclusively controls the Luna rocket launcher. They can "aim" with the Luna using a simple day sight with a fixed magnification of 4x (ARI01) but it is unable to toggle any enhanced vision modes:

NOTE: Refer to the Capabilities section for a more detailed explanation of the Luna's usage.

(*) "Damage" from the 3R10's nuclear payload is not applied in a conventional manner as it is inflicted via scripting.

Short-ranged ballistic rocket launcher. Can launch rockets with either conventional or nuclear payloads:

Assuming that the Luna is rearming from a logistics vehicle or crate, it takes up to 600 seconds (10 minutes) to install another rocket onto the rail.

Solutions remain identical for both conventional 3R9 HE and 3R10 nuclear payloads.