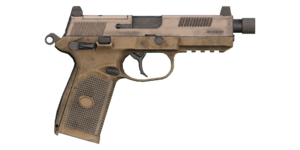 The 4-five is a .45 handgun used in limited numbers by both NATO forces and the Livonian Defense Force in ArmA 3.

The 4-five is a polymer framed, semi-automatic handgun chambered to fire the .45 ACP round.

The 4-five is classed as a heavy pistol and is often favoured for use by NATO/LDF officers and recon operatives.

Thanks to the greater stopping power of its .45 ACP round, the 4-five makes for a powerful pistol at close ranges. Compared to NATO's standard-issue sidearm which fires less hard-hitting 9 mm ammunition, the 4-five can put down most targets that aren't wearing heavy plate carriers in two or three hits.

At the same time, the primary downside to the 4-five stems from its low muzzle velocity versus the P07's 9 mm round. Consequently, this also means that the 4-five is heavier to carry while also possessing a much smaller magazine capacity (11 rounds versus the P07's 16- or 30-round magazines).

The 4-five only accepts a single magazine type. It has a "mass" value of 7 units:

Contains 11 rounds worth of .45 ACP ammunition. Does not contain any visible tracers.