The 6G30 is a 40 mm grenade launcher featured in both ArmA: Cold War Assault and ArmA: Armed Assault. 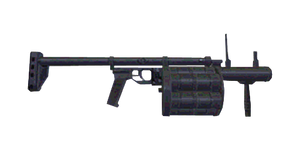 The 6G30 is a revolver-type grenade launcher with a double-action operation. It is designed to fire caseless 40 mm grenade rounds.

It loads from 6-round cylinders and is limited to a fire rate of up to 120 rounds per minute. The 6G30 has a maximum effective range of up to 350 metres.

The 6G30 served as the primary weapon of Soviet heavy grenadier units at the height of the Malden Islands Crisis. Like its American-made counterpart, the 6G30 is a multi-shot grenade launcher that can be used to suppress large groups of enemy infantry at distances of up to 350 metres.

Compared to the MM-1, the 6G30 has a smaller grenade capacity of only six rounds (versus the MM-1's twelve). But unlike its U.S. counterpart, the 6G30 uses a flip-up ladder sight that is easier to aim with.

However, it's still rather difficult to make the most out of the 6G30's maximum range since the bottom three positions of the ladder are obscured by the front sight post. This means that although it has a theoretical range of 350 metres, in practice this is mostly limited to just 250 metres.

The 6G30 can only load one type of "magazine"; a 6-round grenade cylinder. Each of these "magazines" occupy a total of four inventory slots apiece:

Standard 6-round cylinder loaded with six high-explosive (HE) grenades.

Grenades are always fired with a muzzle velocity of 60 m/s. They have a blast radius of 7 metres. 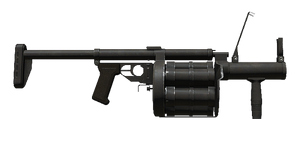 The 6G30 is used exclusively by SLA forces in ArmA: Armed Assault. It was added with the release of the Queen's Gambit expansion pack.

The Armed Assault 6G30 is mostly identical to its Cold War Assault predecessor, though it has a much higher rate of fire in comparison (300 versus 120 RPM) and is capable of hitting area targets at distances of up to 400 metres instead.

The 6G30 now has a muzzle velocity of 80 m/s, and no longer feeds from individual single-round "magazines". It instead loads from 6-round cylinders which occupy secondary weapon slots as opposed to primary, though it also means that the user can no longer carry an adequate supply of ammunition for both the 6G30 and a sidearm simultaneously (unless they choose to forgo handgun magazines altogether).

The 6G30 is limited to loading 6-round cylinder "magazines". They take up one secondary inventory slot per "magazine":

Standard 6-round cylinder loaded with six high-explosive (HE) grenades.

Grenades are always fired with a muzzle velocity of 75 m/s. They have a blast radius of 7.2 metres.