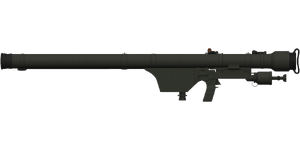 The 9K32 Strela-2 is a 72 mm surface-to-air missile launcher used by the CSLA as well as in limited with FIA guerillas in ArmA 3. It was added with the release of the CSLA Iron Curtain Creator DLC.

The 9K32 Strela-2 is a shoulder-launched, fire-and-forget, surface-to-air missile launcher.

It is designed to fire infrared-guided missiles fitted with 72 mm high-explosive (HE) warheads. The launcher is capable of locking onto flying targets at distances of up to 2,300 metres.

It takes 3 seconds to acquire a successful lock-on, though any attempted locks by the 9K32's seeker still has an 80% chance to have its lock be broken by defensive flare countermeasures.

9K32 launchers can only be loaded with one type of missile. It has a weight of 80 "mass" units:

9M32Ms are always launched with an initial velocity of 28 m/s. The motor will then proceed to ignite 0.002 seconds afterwards, and requires a further 5 seconds of flight time to attain a maximum velocity of 500 m/s. Upon impact, the warhead has a blast radius of 7 metres.

The missile's seeker has an 80% chance of losing lock against flare-based defensive countermeasures.