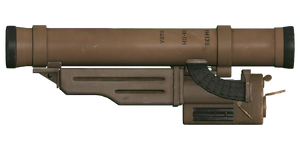 The 9M135 Vorona is a 130 mm anti-tank missile launcher used exclusively by CSAT forces in ArmA 3. It was added with the release of the Tanks DLC.

The 9M135 Vorona is a wire-guided, shoulder-launched anti-tank missile launcher.

It is designed to load and fire missiles fitted with either high-explosive anti-tank (HEAT) or high-explosive (HE) warheads. The launcher itself uses an optical scope that has a magnification strength of 2x, a built-in laser rangefinder, and is able to switch between using normal day and orange/red-hot thermal vision modes.

A larger counterpart to the smaller Titan MPRL Compact, the 9M135 does not utilise homing guidance to track vehicles and relies on SACLOS instead. The missiles themselves can be manually controlled up to a maximum distance of 2,000 metres.

The 9M135's two main drawbacks are that it is purely wire-guided and that its launcher is significantly heavier to carry compared to the Titan.

In the case of the former, the 9M135's effectiveness will be solely dependent on the operator being able to maintain aim on the target constantly. Since it relies on SACLOS for guidance, this leaves them vulnerable for the entire duration of the missile's flight. Likewise, the 9M135's lack of an alternate top-attack flight profile will make hitting certain sections of a vehicle more difficult to achieve (i.e. hitting the turret of a moving tank).

However, as compensation for this lack of homing capability, both of the 9M135's anti-personnel and anti-vehicle warheads are significantly more powerful than the Titan's. Additionally, because it doesn't utilise any sensors for guidance, ground vehicles equipped with infrared warning receivers (IWR) will not be alerted to an incoming missile until it hits the vehicle or the crew spot it visually mid-flight. This, combined with its relatively quiet launch profile, makes the 9M135 a deadly AT launcher for setting up ambushes against unwary crews.

The 9M135 Vorona is capable of loading and firing two types of missiles. They both have the same weight of 100 "mass" units:

The 9M135's HEAT missile is designed to punch through the armour of Main Battle Tanks and heavy Infantry Fighting Vehicles. It can also be used to raze fortified structures that would otherwise be immune to non-AT munitions.

Since it has a tandem warhead, the 9M135 can bypass slat cages with the explosive charge while the penetrator remains intact in order to inflict damage against the vehicle's actual armour. It is still recommended to destroy the slat cage with another explosive weapon or with the 9M135's own HE missile first however, as this will maximise the damage potential of the HEAT missile.

The HEAT missile has a maximum control range of 2,000 metres. It has an initial velocity speed of 150 m/s and can reach a top in-flight speed of 200 m/s. The warhead has a blast radius of 3.5 metres, while the kinetic submunition has a launch velocity of 1,000 m/s and a penetration depth of 900 millimetres.

The 9M135's HE missile is purely an anti-personnel munition. It will not harm armoured vehicles since the warhead lacks a penetrator submunition, and relies purely on explosive concussion to inflict damage.

When used in conjunction with HEAT missiles, it can still be relatively useful against slat cages on armoured vehicles. Unarmoured vehicles like Offroads or Light Strike Vehicles are also prime targets for the HE missile.

The HE missile has a maximum control range of 2,000 metres. It has an initial velocity speed of 150 m/s and can reach a top in-flight speed of 200 m/s. The warhead has a blast radius of 8 metres.