The A-10 is used exclusively by U.S. military forces in ArmA: Cold War Assault.

The A-10 is a single-seat, twin-engined, straight-wing jet that was designed to meet the need for a fixed-wing aircraft that could attack armoured vehicles, main battle tanks, and other ground targets.

Armament
It is armed with a 30 mm cannon that is mounted beneath the cockpit's nose, and carries air-to-ground Maverick anti-tank missiles on its wings.

The A-10 is always armed with eight AGMs at a time, with four carried on each wing. On the other hand, the main cannon feeds from a single linked belt that has 2,000 rounds of high-explosive (HE) shells.

Features
Alongside the Apache attack helicopter, the A-10 was designed to tackle the expected horde of Soviet MBTs on the battlefields of Western Europe. With the combination of a powerful 30 mm cannon and a payload of anti-tank AGMs, the A-10 can cut its way through enemy steel with ease.

It can fly unopposed against almost every ground threat; bar perhaps 9K32-armed infantry and the Shilka SPAAG. In the case of the former, it will depend on who engages first, as the A-10's cannon will quickly shred the infantry if they get spotted by the pilot. In the case of the latter, the A-10 can remain completely safe by simply staying out of its range and fire off one or two AGMs from a standoff distance.

The A-10 serves as the American counterpart to the Soviet Su-25. Both are armed with 30 mm cannons, carry anti-tank air-to-ground missiles, and are designed to provide close air support.

The main difference is that the A-10 has two additional AGMs whereas the Su-25 can only carry six at a time, which makes the A-10 the arguably better tank hunter.

Drawbacks
However, it should be noted that the A-10 doesn't carry any additional ordnance besides its anti-tank AGMs (for its default loadout). Whereas the Soviet Su-25 has rocket pods for backup and can saturate ground targets without having to waste a missile, bomb, or cannon rounds, the A-10 can only resort to firing its main cannon after all of its ordnance is depleted.

Crew Capacity
The A-10's cockpit only contains a single seat for the pilot themselves. It is unable to transport any other crew or passengers. 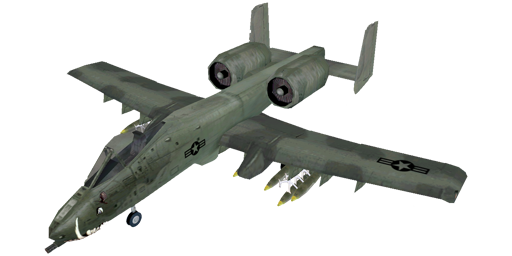 Identical to the baseline AGM-armed model in almost every way, but exchanges its payload of Maverick missiles for eight GBU-24 laser guided bombs instead.

The GBU-24s can be manually dropped or guided by laser to hit a specific target directly via handheld designators (specifically carried by U.S. black ops infantry).

Both variants of the A-10 have 50 points worth of armour plating.

The pilot controls all weapon systems on the A-10 regardless of loadout:

NOTE: Only available on the baseline A-10 variant.

There is always a fixed delay of 0.5 seconds in-between launches. Maverick missiles are capable of destroying any ground vehicle (including Heavy Tanks) with a single hit no matter the impact location.

Maverick missiles are always soft launched, and take a further 5.5 seconds after being launched to reach a top speed of 350 m/s in-flight. The warhead has a blast radius of 2.5 metres.

NOTE: Only available on the A-10 (LGB) variant.

Laser-guided bomb. Can be optionally employed as an unguided bomb instead.

There is always a fixed delay of 0.5 seconds in-between drops. GBU-24s have a blast radius of 15 metres and can consistently destroy any ground vehicle or naval vessel with a single hit (aside from LSTs).

The A-10 is used exclusively by U.S. Army forces in ArmA: Armed Assault.

Like its Cold War Assault counterpart, the A-10 is still designed for anti-tank duties.

Armament
It is armed with the GAU-8 30 mm gatling cannon as its primary weapon. Its alternate weaponry consists of air-to-ground anti-tank missiles along with four 70 mm rocket pods.

The GAU-8 feeds from a single linked belt containing 1,350 rounds worth of armor-piercing (AP) shells, while the FFAR pods contain up to a maximum of 7 rockets apiece fitted with high-explosive (HE) warheads; for a combined total of 28 rounds.

Features
The A-10 mostly remains the same but exchanges three of its Maverick AGMs for four unguided rocket pods instead, allowing it to be more useful against infantry targets.

However, it no longer features a separate LGB-armed variant and has had its precision bombardment role transferred to the AV-8B.

Mobility
It flies faster and has marginally better handling than its Cold War-era predecessor. It is still much slower than the SLA's Su-34 fighter-bomber however, and is unable to keep up with the latter even at level altitudes.

Drawbacks
While it's still a tough aircraft like its Cold War Assault predecessor, the A-10 is by no means impervious to ground fire. It will be easily shot down if its pilot remains careless and takes too much much damage from handheld SAMs or AA cannons.

Since it lacks VTOL capability like the AV-8B, the A-10 also relies heavily on airstrips to resupply from which can limit its utility on extended CAS missions.

Crew Capacity
The A-10 only supports a single crewman (the pilot). It is unable to transport passengers.

The plane's hull can withstand up to 75 points of damage. Depletion of the hull's integrity will instantly result in its destruction.

The pilot controls all three weapon systems on the A-10:

There is a forced delay of 1 second in-between launches. AGM-65s are soft launched and require 2.5 additional seconds for their motors to gain a top speed of 313 m/s in-flight. The warheads have a blast radius of 2 metres.

The pods are capable of firing off one rocket every 0.2 seconds. The rockets have initial launch velocities of 44 m/s and can reach a top speed of 1,000 m/s in mid-flight. The warheads are HE-based and have a blast radius of 12 metres.

The A-10 Thunderbolt II is used by both the U.S. Marines and U.S. Army forces in ArmA 2.

Returning in ArmA 2, the A-10's range of applicable roles that it can now fulfil have been greatly expanded with the addition of diverse ordnance types.

The LGBs are carried beneath the fuselage, and can be used to strike hardened targets with precision accuracy (provided that they're guided by laser markers).

The total amount of ordnance carried ranges from:

Features
The ArmA 2 A-10 is much more heavily armed and better protected than both the Harrier and F-35 VTOLs, as it can absorb a decent amount of punishment before suffering from critical failure.

Mobility
It handles decently at low altitudes and speeds compared to the AV-8B/F-35, but is largely outmatched when it comes to both speed and agility.

As in Armed Assault, the A-10's lack of VTOL capability also prevents it from being able to take-off or land without a flat surface airstrip.

Drawbacks
It should be noted that the A-10 faces far more dangerous threats in ArmA 2 compared to its predecessor. The Russian-made 2S6M Tunguska for instance, possesses powerful long-range missiles that will cut down the A-10 if it gets detected on radar.

If engaging the 2S6M on an open field, then the A-10 will usually be able to take it out first with little difficulty. But if the 2S6M is hiding in a thick forest or concealed behind hilly terrain, then the pilot must resort to launching countermeasure flares preemptively while scanning constantly for the vehicle's position.

Crew Capacity
The A-10 can only carry its pilot, and is unable to transport any passengers or additional flight crew.

The plane's hull can take up to 75 points of damage. Will result in a total loss if its integrity fails.

All weapon systems are controlled by the A-10's pilot:

It can attain a fire rate of up to ~ 4,950 RPM and has a muzzle velocity of 820 m/s. The GAU-8 has an effective firing range of approximately 1,000 metres. Accuracy-wise, it has a dispersion of 0.006 rad regardless of distance, while the shells have a blast radius of 3 metres.

There is a forced delay of 1 second in-between launches. The missile is soft launched and requires 2 seconds for its motor to attain a top speed of 300 m/s. The warhead itself has a blast radius of 2 metres.

Laser-guided bomb. Can be optionally employed as an unguided gravity bomb instead.

There is a small delay of 0.2 seconds in-between bomb drops. The bombs themselves have a blast radius of 12 metres, and are capable of destroying any ground vehicle in a single hit.

Unguided 70 mm rockets. Useful against groups of infantry and unarmoured/lightly-armoured ground vehicles. Rockets are always launched in pairs and contain high-explosive (HE) warheads.

There is a delay of 0.2 seconds in-between volleys (300 RPM) and rockets are launched with an initial velocity of 44 m/s. It takes a further 1.1 seconds before the motors can reach their top speed of 740 m/s in mid-flight. The warheads have a blast radius of 12 metres.

Infrared-guided air-to-air missile. Has a maximum lock-on range of 9,000 metres.

There is a delay of 0.1 seconds in-between missile launches. 30 seconds will be required to reload a fresh batch of missiles at a logistical vehicle (assuming the A-10 has run out). It takes a total of 5 seconds for the missile's motor to reach a top speed of 828 m/s in mid-flight.

The seeker has a 20% chance to lose lock against flare countermeasures. Its warhead has a blast radius of 10 metres.

The A-10 does not have a Missile Approach Warning System and will not warn the pilot of incoming missiles already in mid-flight.

The A-10 has a Radar Warning Receiver, and will alert the pilot of being locked-onto by radar-based targeting systems.

The A-10 lacks an Infrared Warning Receiver, and will not warn the pilot of being targeted by infrared-based weapon systems.