The A-143 Buzzard is a multi-role light attack jet used exclusively by the AAF in ArmA 3.

The Buzzard is a low-set, straight wing jet-powered aircraft with a double-taper planform. It is designed to be a low-cost aircraft capable of performing both ground attack and air interdiction missions.

Armament
The Buzzard can be outfitted to use either an AA (Air-to-Air) or CAS (Close Air Support) loadout, with each variant carrying armament suited for their respective missions.

By default, both variants are armed with a twin-barrelled 20 mm cannon that is loaded with 300 rounds of high-explosive (HE) shells.

The Buzzard has seven pylons (three on each wing and one under the fuselage) that support dynamic loadouts.

Features
Semi-stealthed by virtue of its design, the Buzzard is a flexible light plane which can fulfil either air-to-ground or air-to-air roles thanks in part to its comprehensive loadout options. It is also slingloadable by heavy-lift helicopters, allowing stranded or disabled Buzzards to be airlifted for repairs.

The CAS variant of the Buzzard also retains an integrated laser designator which can be used to provide self-designation for its guided payloads.

However, it should be noted that the Buzzard's laser designator is only functional on the CAS variant. Neither the default Buzzard nor the AA variant have a usable laser marker, although the pilot camera on both variants can still be controlled to lock-on to lasers being marked by other sources.

Drawbacks
The Buzzard has fairly average performance in all aspects. Though it handles better than the Wipeout, it isn't a true CAS jet even with its ground attack loadouts. It also lacks a passive anti-radiation radar like both its NATO and CSAT counterparts, greatly limiting its long-range strike capability.

Furthermore, the Buzzard's sensor suite can be described as mediocre at best. Its active radar pales in comparison to the Gryphon maximum range-wise, and it also cannot be armed with AMRAAM C missiles. Its sole "long-range" A2A missile for instance, Zephyrs, are largely hampered by their pitiful sensor ranges and extremely tight lock-on cones. Needless to say, the Buzzard is unable to perform the role of an air superiority fighter.

Lastly, the Buzzard technically retains only six pylons as the seventh can only mount the 20 mm cannon. This more or less restricts it to carrying the same amount of ordnance as the Gryphon.

Crew Capacity
The Buzzard has a maximum crew capacity of just one. It cannot transport any passengers or crewmen. 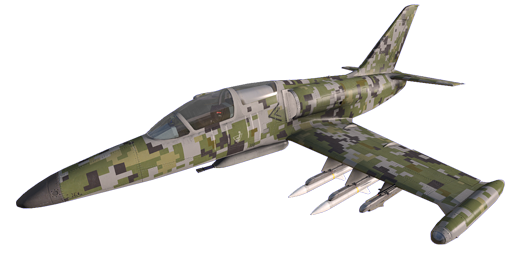 It has all of its pylons loaded exclusively with a mixture of air-to-air missiles by default; two infrared guided ASRAAMs and four radar guided Zephyrs. It supports dynamic loadouts and can be changed to load other types of munitions. 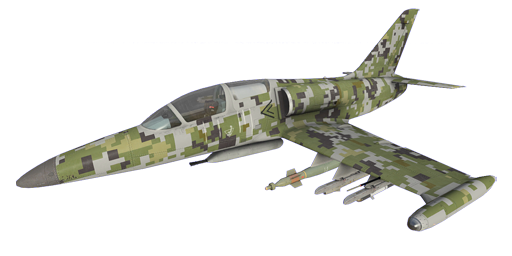 Just like the AA variant, it also supports dynamic loadouts and can be adjusted to mount other types of munitions on its pylons.

This is the only variant that can make use of the pilot camera's laser designator.

All variants of the Buzzard have base armour values of 55.

The jet's hull can withstand 220 points of damage. Will result in a total loss if the hull's "health" is depleted.

The Buzzard's engine can resist 165 points of damage before failing. It takes 400% increased damage from high-explosive (HE) type weapons.

If damaged: Decreases thrust output and can prevent the Buzzard from attaining its top speed.
If destroyed: Instantly blows up the Buzzard if the plane's integrity is at critical.

The Buzzard's flight instruments and Multi-Functional Displays (MFD) can take up to 165 points of damage before failure. All instruments take 350% increased damage from HE-type weapons, and 50% of damage is also transferred onto the Buzzard's main "health" pool.

If damaged: Causes periodic flickering of MFD screens. Instruments remain fully functional.
If destroyed: The MFDs will be disabled. Instruments will malfunction and do not provide proper readings.

The Buzzard has a total of three fuel tanks and two separate fuel lines running along the wings.

The primary fuel tank can survive 247.5 points of damage before rupturing (with a 400% damage penalty from HE-type weapons). The secondary tanks can only resist 137.5 points (they each have a 500% penalty), while the remaining two fuel lines can incur even less damage; immediately failing upon taking 99 points of damage (they suffer from only 300% increased damage to HE-type weapons).

Only damage against the primary (80%) and secondary fuel tanks (20%) can cause damage to the Buzzard's main "health" pool; the fuel lines do not transfer any damage even if they are destroyed.

If damaged: Gradual fuel leaking; will lose up to a maximum of 50% of the remaining fuel supply.
If destroyed: Rapidly lose entire fuel supply over the course of several seconds.

Both the ailerons and elevators can survive 82.5 points of damage before failure. For the rudders, they can withstand 110 points of damage. All control surfaces take 300% increased damage from HE-type weapons. A portion of the damage inflicted onto any of the components is also transferred onto the Buzzard's main "health" pool (30%).

Depending on the control surface's integrity, the jet's handling and agility will be degraded progressively. If multiple parts become disabled simultaneously, the Buzzard's stability will take a severe penalty and become nearly impossible to control at low airspeeds.

Like the Gryphon, the Buzzard is not intended to serve as a stealth fighter. Its small size however, allows it to remain hidden (to a limited degree) as a semi-stealth jet against all types of electronic sensors:

The Buzzard has a radar cross-section rating of 0.8, which lowers the maximum detection range of active radars by 20%.

The Buzzard has reduced visibility on the infrared spectrum, and can only be detected at 80% of an infrared-based sensor's maximum range (factor of 0.8; reduction of 20%).

The Buzzard is slightly more difficult to spot visually, and will reduce the maximum range of any visual-based sensors to only 80% (factor of 0.8; reduction of 20%).

The Buzzard has an array of sensors for both air-to-air and ground attack missions, though it is primarily optimised for close air support:

It has an active radar range of 8 km against aerial targets and 4 km against ground targets. Azimuth and elevation coverage is limited to 90 degrees in both directions, while identity recognition locks in at 3 km out from a target.

They each have a minimum detection range of 500 m and an azimuth coverage of 26 degrees, while for elevation they are limited to 20 degrees. Both are located in the pilot camera, and will work independently of the aircraft's heading if rotated.

Targets can only be tracked if they are moving at speeds of less than 360 km/h, and will only be recognised once they get within 2 km range of the Buzzard.

NOTE: Only the weapons used for the default loadouts on the AA/CAS variants are listed here. For full details on ordnance that can be mounted on the Buzzard, refer to the dynamic loadouts article.

NOTE: Only available as a default weapon on the A-143 Buzzard (AA) variant.

Relies on the Buzzard's Active Radar sensor to function.

Relies on the Buzzard's Infrared Search and Track sensor to function.

NOTE: Only available as a default weapon on the A-143 Buzzard (CAS) variant.

Infrared-guided anti-tank missile. Relies on the Buzzard's Infrared Search and Track sensor to function, though it can also be manually controlled via MCLOS through the pilot camera (a laser spot is not required for guidance).

NOTE: Only available as a default weapon on the A-143 Buzzard (CAS) variant.

Predicted Impact Point assistance is provided for "aiming" with the GBU-12s if no external source of laser guidance is available.