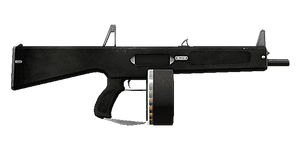 The AA-12 is a 12G shotgun used exclusively by ION PMC contractors in ArmA 2. It was added with the release of the Private Military Company DLC.

The AA-12 is a blowback-operated, selective-fire combat shotgun that is chambered to fire 12 Gauge shotgun shells.

It is primarily designed to load 20-round pellet or slug shell drum magazines, but can also load explosive fragmentation shells as well. It is able to attain a fire rate of up to 300 rounds per minute, and has a muzzle velocity of 396 m/s. The AA-12 lacks the ability to mount any accessories or muzzle attachments.

With the deadly combination of being able to fire on full auto as well as being able to load high-explosive fragmentation (HE-Frag) shells, the AA-12 is undisputedly one of the most powerful infantry weapons available in ArmA 2. Its destructive potential rivals that of the M32 grenade launcher, and is effective against cars and lightly armoured vehicles such as the BRDM-2. Even helicopters can be damaged (or shot down entirely) should they fly too low and get within range of the AA-12.

However, for all its prowess the AA-12 does have one major drawback: its ironsights are far too small to be used effectively for hitting targets that are beyond 200 metres away. While this can be negated on lower difficulty settings where crosshairs are enabled, it still renders aiming with the AA-12 extremely difficult compared to the M1014 (which has easy-to-use ghost ring sights).

The AA-12 is capable of loading up three types of drum magazines. All three require only one inventory slot to carry:

Explosive anti-personnel shot shell. Has a blast radius of 2 metres on impact but does not penetrate vehicle armour.

Patrick Dixon (right) can be seen armed with the AA-12.