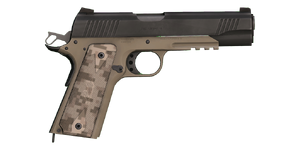 The ACP-C2 is a .45 handgun used by several BLUFOR and INDFOR factions in ArmA 3.

The ACP-C2 is a semi-automatic handgun chambered to fire the .45 ACP round.

It loads from 9-round magazines, and can attain a fire rate of up to 400 rounds per minute with a muzzle velocity of 280 m/s. The ACP-C2 cannot mount optical sights, but supports muzzle attachments and has a compact underbarrel rail that can be fitted with a flashlight.

Serving as the standard-issue sidearm of all AAF troopers and some FIA guerillas, the ACP-C2 is primarily used as a backup weapon for close quarters combat and, like most other pistols has an effective range of just 50 metres and no more. Though it is technically classified as a light pistol, it fires the same .45 ACP round shared by its heavy NATO counterpart.

Altogether, these drawbacks essentially make the ACP-C2 the least useful semi-automatic sidearm of all, with its only upside being that it is slightly more accurate than the 4-five. However, even this is somewhat redundant given that sidearms are utilised at very close ranges in almost every situation to begin with, which renders this advantage null.

The ACP-C2 only accepts a single magazine type. It has a "mass" value of 6 units:

Contains 9 rounds worth of .45 ACP ammunition. Does not contain any visible tracers.

Reloading the ACP-C2. Note the compact rail located beneath the barrel.