The AH-64 Apache is a heavy attack helicopter featured in both ArmA: Cold War Assault and ArmA 2.

The AH-64 Apache is a twin-engined, four-bladed, multi-mission attack helicopter that was designed to be a stable and highly survivable aerial weapons platform.

It is operable under all lighting and weather conditions and is mainly designed to serve as a tank hunter.

Armament
It is armed with a single 30 mm chain gun mounted beneath the nose of the fuselage, and has air-to-ground anti-tank guided missiles fitted onto the pylons on each stub wing, as well as two 70 mm rocket pods.

The 30 mm chain gun feeds from a single 500-round linked belt of high-explosive dual purpose (HEDP) shells, while the rocket pods each carry 19 rockets fitted with high-explosive (HE) warheads for a grand total of 38 rockets.

Each stub wing has up to four Hellfire air-to-ground missiles fitted onto their pylons for a total of 8 ATGMs.

Features
Intended to meet the threat of Soviet Main Battle Tank formations on the fields of Western Europe, the AH-64 is one of the most advanced attack helicopters in service with the U.S. military at the height of the Cold War.

Unlike the lighter AH-1 gunship, the AH-64 is better armoured and slightly more resistant to large calibre anti-aircraft weapons, especially against the 23 mm cannons used by the Soviet ZSU.

Mobility
The AH-64 flies faster and has (arguably) better handling since its engines are more powerful.

Crew Capacity
The AH-64 is only able to carry a crew of two that consists of both the pilot and the gunner.

The AH-64 has 80 points worth of armour plating.

The gunner position controls the turret-mounted Cannon 30 mm and Hellfire missiles/FFAR rocket pods carried onto stub wings located on both sides of the airframe:

30 mm autocannon. Can only load HE-type shells which have a blast radius of 2 metres.

Air-to-ground anti-tank missile. Utilises infrared-guidance and has a maximum lock-on range of 1,500 metres.

Hellfire missiles are launched with an initial velocity of 30 m/s and take a further 5.5 seconds to reach a top in-flight speed of 200 m/s. The warhead itself has a blast radius of 2.5 metres.

The rockets have initial launch velocities of 44 m/s and take 3.5 seconds for their motors to reach a top in-flight speed of 200 m/s. The warheads themselves have a blast radius of 3 metres.

The AH-64D is the latest variant in the Apache family of gunships that incorporates new avionics and most significantly, the "Longbow" radar mounted atop the main rotor.

Armament
By default, it is always armed with a pair of 70 mm rocket pods, a 30 mm chain gun fitted beneath the nose of the cockpit, and air-to-ground ATGMs mounted onto racks on each stub wing.

While the ArmA 2 AH-64D has a similar loadout to its Cold War Assault counterpart, the total amount of spare ammunition for the M230 chain gun is more than doubled as it feeds from a 1,200-round belt instead of a 500-round one (its shells are also HEDP).

It can still carry up to 8 Hellfire ATGMs at a time, while each Hydra pod contains 19 rockets for a total of 38.

Features
Like its Cold War-era predecessor, the AH-64D serves as the heavy counterpart to the lighter AH-1Z gunship. It is far more heavily armoured compared to the AH-1Z, and is also equipped with a 30 mm chain gun as opposed to a 20 mm cannon.

The chain gun's HEDP shells are more than capable of tearing through the plating of medium armoured vehicles, and is even able to damage the exposed components on MBTs.

Notably, the AH-64D's radar is slightly more powerful and can detect enemy ground vehicles from a greater distance than the AH-1Z.

Though it doesn't carry any air-to-air missiles as standard, the AH-64D can be retrofitted with a full loadout of short-range AAMs to fight off enemy helicopters and even (at least threaten) low-flying fixed-wing jets.

Drawbacks
Its only real downside is that its handling is slightly stiffer due to being the heavier helicopter of the two, which causes it to lose speed rather quickly when making sharp turns. The AH-1Z on the other hand, is more agile and turns better while retaining its current airspeed.

Crew Capacity
The AH-64D has enough seats for a crew of two who are seated in a tandem layout, with the pilot sitting behind and above the co-pilot/gunner. 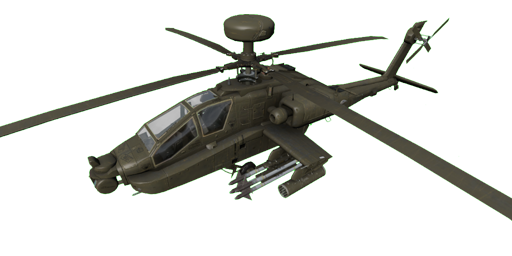 Identical to the baseline AH-64D but exchanges all of its Hellfire ATGMs for eight short-range, infrared-guided AIM-9L Sidewinder air-to-air missiles instead.

Both the rocket pods and 30 mm chain gun are retained on this sub-variant.

Both variants of the AH-64D have base armour values of 60.

The hull can withstand 60 points of damage.

The engine can only survive 15 points of damage before failing. A damaged engine will cause AH-64Ds to have difficulty gaining lift due to a reduced power output.

The cockpit's flight instruments can only take 9 points of damage. The pilot/gunner's Head Mounted Display (HMD) will flicker if damaged, but will only be disabled if the instruments are critically damaged.

The main rotor can only withstand 18 points of damage. Disabling the main rotor will prevent the pilot from being able to maintain lift. 30% of damage is always transferred onto the main "health" pool of the AH-64D.

The tail rotor is limited to taking just 12 points of damage. Disabling the tail rotor will prevent the pilot from being able to control the main rotor's torque. At least 10% of damage will be shared with the main "health" pool of the AH-64D.

The gunner position controls all weapon systems on the AH-64D regardless of variant. For optics, they have access to three fields of view and can toggle either day, night or black-hot/white-hot thermal vision modes:

It can attain a fire rate of up to 625 rounds per minute and has a muzzle velocity of 805 m/s. At distances of approximately 1,500 metres, the M230 has a dispersion spread of 0.002 rad. The shells are partially armour penetrating, but have a blast radius of just 1 metre.

Rockets are always launched in pairs. There is an imposed delay of 0.08 seconds in-between launches (750 RPM). They have initial velocities of 44 m/s and take a further 1.1 seconds for their motors to reach a top speed of 740 m/s in mid-flight. The warheads themselves have a blast radius of 12 metres.

NOTE: Only available on the baseline AH-64D variant.

Anti-tank guided missiles. Locks on via infrared only, but can also be guided via laser instead (both have a maximum range of 8,000 metres).

Missiles are soft launched and take a further 3.25 seconds after launch to reach a top speed of 425 m/s in mid-flight. There is always an imposed delay of 1 second in-between launches. The warheads have a blast radius of 2 metres.

NOTE: Only available on the AH-64D (AA) variant.

The AIM-9L has a firing delay of 0.1 seconds in-between launches. Assuming that the AH-64D is rearming from a logistical vehicle, it takes a full 30 seconds to rearm all missiles.

Launched missiles take 10 seconds for their motors to reach a top speed of 500 m/s in mid-flight. The warhead itself has a blast radius of 7 metres.

The AH-64D has an integrated Missile Approach Warning System, and will alert the pilot of incoming missiles that are locked onto it.

The AH-64D has a Radar Warning Receiver, and will alert the pilot of being locked onto by radar-based targeting systems.

The AH-64D has an Infrared Warning Receiver, and will alert the pilot of being locked onto by infrared-based targeting systems.