The AH-6 is used by both U.S. Army and RACS military forces in ArmA: Armed Assault.

Developed from the MH-6 light utility helicopter, the AH-6 is a small, versatile attack helicopter that is used primarily as an air support platform for special operations units.

Armament
By default, the AH-6 is always armed with twin 7.62 mm miniguns and 70 mm rocket pods that are fitted onto the stub wings attached onto both sides of the fuselage.

Features
Flown by both U.S. Army and RACS aviation units, the AH-6 serves as a lightweight and speedy counterpart to the larger AH-1Z.

Where it lacks in firepower, the AH-6 makes up for in agility as it shares the same nimble airframe of the MH-6. Though the AH-6 cannot transport any passengers due to lacking side benches, its main strength lies in that it's armed and can defend itself from ground threats.

Mobility
The AH-6 isn't that fast for a helicopter of its size, but is similarly as agile as the MH-6 and can dart in and out of tight airspaces with ease.

Drawbacks
The AH-6 also retains the same weaknesses as the baseline MH-6 - namely, that it provides almost non-existent protection for both crewmen. It is extremely fragile and is susceptible to small arms fire.

Crew Capacity
The AH-6 is supports a crew consisting of both the pilot and a co-pilot. It is unable to carry any additional passengers.

AH-6 hulls can withstand up to 30 points of damage.

The engine can only withstand 7.5 points of damage before failing.

The AH-6's onboard systems can only incur a meagre 4.5 points of damage.

The main rotors can take 9 points of damage before breaking.

The tail rotors can only withstand 6 points of damage.

Both weapon systems on the AH-6 are controlled exclusively by the pilot and are forward-facing only:

It can toggle two fire modes:

Both miniguns have muzzle velocities of 900 m/s and identical dispersion of 0.015 rad at distances of up to 800 metres.

The pods are capable of firing off one rocket every 0.2 seconds. The rockets have initial launch velocities of 44 m/s and can reach a top speed of 1,000 m/s in mid-flight. The warheads are high-explosive (HE)-based and have a blast radius of 12 metres.

The AH-6J Little Bird is used exclusively by the U.S. Army in ArmA 2. It was added with the release of the Operation Arrowhead expansion pack.

Returning in ArmA 2, the armed Little Bird continues to serve as a lightweight counterpart to the heavier Viper and Apache attack helicopters.

Armament
Its loadout remains unchanged in ArmA 2. As per usual, the AH-6J still carries twin 7.62 mm miniguns and 70 mm rocket pods fitted onto stub wings attached to both sides of the airframe.

The miniguns feed from a single 4,000-round linked belt, while the twin rocket pods carry a combined total of 14 rockets fitted with HE warheads.

Features
The AH-6J is still unable to transport any passengers as it continues to lack side benches. However, it is now outfitted with defensive avionics in the form of an RWR that will alert to crew of being locked onto by radar-based targeting systems.

Defensive countermeasure flares and chaff dispensers can also be launched to ward off any guided projectiles locked onto it, though its lack of a MAWS will not alert the pilot of missiles that are already in-flight.

Drawbacks
As in Armed Assault, the AH-6J provides practically zero protection for both pilots and remains just as vulnerable as it was previously.

Crew Capacity
The AH-6J is only able to transport the pilot and co-pilot. It cannot carry any additional passengers or crew. 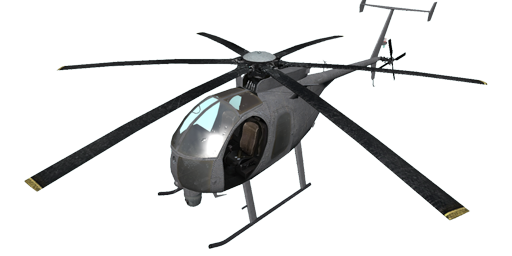 Uniquely designed unmanned drone model that lacks any armament aside from an externally attached observation pod.

The pod's camera can switch between normal day and black/white-hot thermal vision modes. It does not carry any countermeasures or defensive avionics, but has an improved infrared scanner that is specifically optimised for detecting ground targets.

(*) The AH-6X is not functional in normal gameplay unless it has been synchronised as being controllable with a UAV Terminal in the mission editor (using the UAV module).

Both the AH-6J and unmanned AH-6X have base armour values of 25.

Their hulls can withstand 25 points of damage.

Their engines will be disabled if they take more than 6.25 points of damage. A damaged engine will greatly reduce its power output.

The cockpit's flight instruments (on manned variants) can only take 3.75 points of damage before failing.

The main rotor can only withstand 7.5 points of damage. Disabling the main rotor will prevent the pilot from being able to maintain lift. At least 30% of damage is shared with the helicopter's main "health" pool.

The tail rotor is limited to taking just 5 points of damage. Disabling the tail rotor will prevent the pilot from being able to control the main rotor's torque. 10% of damage is shared with the main "health" pool of the helicopter.

Weapon systems on the AH-6J are controlled by the pilot and are forward-facing only:

NOTE: Only available on the baseline AH-6J variant.

Two fire modes can be toggled:

Both guns have muzzle velocities of 900 m/s. They have identical dispersion of 0.015 rad at distances of up to 800 metres.

NOTE: Only available on the baseline AH-6J variant.

Rockets are always launched in pairs. There is an imposed delay of 0.08 seconds in-between launches (750 RPM). They have initial velocities of 44 m/s and take a further 1.1 seconds for their motors to reach a top speed of 740 m/s in mid-flight. The warheads themselves have a blast radius of 12 metres.

The AH-6J does not have a Missile Approach Warning System and is unable to alert the pilot of incoming missiles that are already locked onto it.

The AH-6J has a Radar Warning Receiver, and will alert the pilot of being locked onto by radar-based targeting systems.

The AH-6J lacks an Infrared Warning Receiver and is unable to alert the pilot of being locked onto by infrared-based targeting systems.

AH-6J parked side-by-side with its two other variants. The AH-6X can be seen in the middle of the three airframes (note the unique light/pale grey paint scheme).