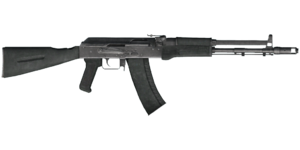 The AK-107 is a 5.45 mm assault rifle used exclusively by the Russian Armed Forces in ArmA 2.

The AK-107 is a gas operated, selective-fire assault rifle with a rotating bolt that is chambered to fire the 5.45×39 mm cartridge.

It loads from the same 30-round plastic magazines used by the AK-74 rifle, and is able to attain a fire rate of approximately ~ 909 rounds per minute with a muzzle velocity of 900 m/s. AK-107s can be zeroed up to a maximum of 1,000 metres and feature alternate variants fitted with the Kobra collimator or the PSO telescopic sight. It does not however, come in any variant equipped with either muzzle suppressors or flashlights/laser pointers.

Essentially the Russian counterpart to the USMC M16A4, the AK-107 is the latest incarnation of the AK-series of assault rifles. A balanced general-purpose rifle, the AK-107 can be used to accurately hit targets at distances of up to 400 metres away.

Unlike its older predecessor, the AK-107 can fire faster and is mostly constructed out of synthetic materials and polymers as opposed to wood. This not only makes it lighter to carry but also easier to adapt to modifications. When compared to its American counterpart on the other hand, it also has a higher rate of fire and is better suited for close quarters thanks to its ability to switch to firing in full auto.

The main downside of the AK-107 is that it does not have a carbine or suppressed variant, which makes it less than ideal for use by vehicle/aircraft crews or special operations units (respectively). Just like the AK-74, the 5.45 mm round that it fires is also quite mediocre performance-wise and has a greater damage drop-off the further the round travels (in contrast to the M16A4's 5.56 mm round). 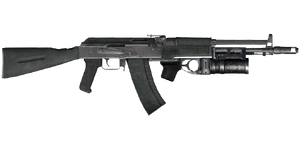 The AK-107 GP-25 is simply the baseline AK-107 rifle that has had an underbarrel grenade launcher attached to it.

The GP-25 uses a notched quadrant sight that is accurate up to an effective range of 300 metres.

This variant is completely identical handling, accessory, and performance-wise; the sole difference being the underbarrel GP-25 which can launch caseless 40 mm grenades with lethal high-explosive (HE) warheads, harmless smoke shells, and less-than-lethal (LTL) flare rounds.

Both variants of the AK-107 support being loaded with two types of magazines. They each occupy a single inventory slot:

30-round plastic magazine. Does not contain any visible tracers.

Specialised magazine loaded with subsonic 5.45 mm ammunition. Rounds fired from this magazine specifically have a lower muzzle velocity of 320 m/s.