The AK-12 series is a modular assault rifle platform used by several BLUFOR, REDFOR and INDFOR factions in ArmA 3. It was added with the release of both the Apex and Contact DLC. 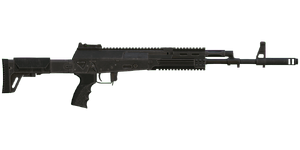 The AK-12 is a 7.62 mm assault rifle used by several BLUFOR, REDFOR and INDFOR factions in ArmA 3. It was added with the release of the Apex DLC.

The AK-12 is a gas operated, selective-fire assault rifle with a long stroke piston. It is chambered to fire the 7.62×39 mm round.

It can load either 30-round polymer magazines designed specifically for the AK-12 or older curved steel magazines used by the AKM. It retains a variable rate of fire that ranges from 600 rounds per minute up to 1,000 rounds on burst mode. The AK-12 has a muzzle velocity of 730 m/s and can accept attachments on all three of its rails; top, side, underbarrel and muzzle.

When it comes to maintaining a balance between performance and handling, the AK-12 is by far one of the better assault rifles to use in ArmA 3. It has very little drawbacks aside from its weight, and since it's chambered to fire the largest calibre out of all the other assault rifles in its class, it also has the greatest damage output out of them all as well.

Meanwhile, its low recoil and high accuracy (its dispersion is identical to that of the baseline MX) makes it quite easy to maintain zeroing on a target.

As with the Navid medium machine gun, the AK-12 has a unique two-round burst mode that has a significantly higher rate of fire than its semi- and fully-automatic modes. The AK-12 will almost always be able to kill unarmoured infantry in close quarters if both rounds successfully land on the target. 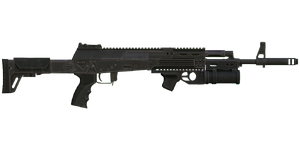 The AK-12 GL is a 7.62 mm assault rifle used by BLUFOR, REDFOR and INDFOR factions in ArmA 3. It was added with the release of the Apex DLC.

The AK-12 GL is simply a modified version of the baseline AK-12 rifle that has an underbarrel grenade launcher attached to it.

Like its parent, it is also chambered to fire 7.62×39 mm while feeding from the same 30-round curved polymer magazines. The underbarrel grenade launcher can launch 40 mm grenades universally shared with other rifle UGLs, ranging from high-explosive (HE) to less-than-lethal (LTL) flare and non-lethal smoke shells.

It is virtually identical in terms of stats and handling. The sole difference is that the AK-12 GL cannot mount accessories onto its underbarrel rail as the GP-25 occupies the rail slot. The GP-25 UGL uses a conventional notched quadrant sight which can be zeroed up to a maximum range of 400 m. 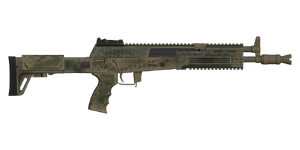 The AKU-12 is a 7.62 mm carbine used by both Russian Spetsnaz operatives and L'Ensemble guerillas in ArmA 3. It was added with the release of the Contact DLC.

A carbine configuration of its parent rifle, the AKU-12 is much lighter to wield and can still load both regular 30- and 75-round magazines.

Its rate of fire remains unchanged with both fire modes. Attachments are supported on all three of its rails: top, side and underbarrel, along with the muzzle itself.

Thanks to a shortened length barrel, the AKU-12 imposes the least amount of penalty to the user's inertia and is quite simple to wield in close quarters. Accuracy-wise, the AKU-12 remains superior to both its American and Iranian-made counterparts despite being the heaviest carbine out of the two.

Although the AKU-12's primary advantage lies in its compact profile, the AKU-12's shortened barrel also causes a drastic reduction to its muzzle velocity. It retains a pitiful speed of just 572 m/s, while its accuracy has also been negatively affected and dispersion increased by 11%.

This severely impacts the AKU-12's effective firing range and causes it to drop to just under 300 metres. Beyond that distance, its 7.62 mm rounds will not retain much energy and their penetration power will be mediocre at best. 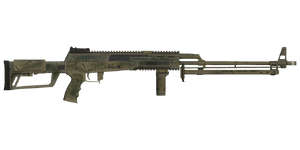 The RPK-12 is a 7.62 mm light support weapon used by both Russian Spetsnaz operatives and L'Ensemble guerillas in ArmA 3. It was added with the release of the Contact DLC.

Intended to complement the baseline rifle, the RPK-12 combines a longer barrel to help fulfil the weapon's role as a light machine gun.

It is intended to primarily feed from its own 75-round drums, though the RPK-12 can also load 30-round rifle magazines if needed as well. Attachments are supported on its front and side rails along with the muzzle, though its usage of an integrated bipod eschews the need for dedicated bipod accessories.

Performance-wise, the RPK-12 features several improvements over its parent weapon. For starters, its fire rate has been raised to ~ 700 rounds per minute (burst remains the same at 1,000 RPM). The increased barrel length also boosts the weapon's muzzle velocity by 10% to 786.5 m/s which - while not too impressive of an upgrade, slightly increases its effective firing range to just over ~ 790 metres.

The RPK-12 also features the highest accuracy out of the AK-12 variants, and easily outstrips its Chinese-made counterpart at ranges of beyond 600 metres. Nonetheless, it still falls short of the MX SW and does not even come close to matching the SPAR-16S.

However, its greatest drawback lies in its weight. Even when unloaded, an empty RPK-12 weighs almost as much as a Mk200 LMG while retaining a pitiful maximum capacity of 75 rounds. Not only is this 25 short of the MX SW (or 75 in the case of the SPAR-16S), this weakness eliminates the RPK-12's usefulness for suppression purposes. The user will most likely need to reload twice per engagement before a Mk200 gunner would have to rearm their first belt.

All variants of the AK-12 family can interchangeably load ten types of magazines ranging from the standard 30-round rifle magazines or 75-round drums. The 30-rounders weigh a "mass" of 10 each while the drums weigh 26 "mass".

Magazines shared with the older AKM do not feature any camouflage options. Only the AK-12's unique magazines are available in three finishes: the standard matte Black, Arid desert camouflage or Lush woodland camouflage:

Green-coloured tracer ammunition (for all 30 rounds of the magazine). They are fully visible to the naked eye.

75-round drum magazine intended for use with the RPK-12 variant. Identical to regular 30-rounders aside from its capacity and weight.

Similar to 30-round rifle magazines, but containing 75 visible green tracers instead. Also weighs the same as normal drums.

7.62 mm ball ammunition stored in a curved steel magazine, used by the AKM. The last four rounds will always consist of yellow tracers and can be seen without night vision.

Identical to regular 7.62 mm AKM magazines, the only difference being that the last four rounds consist of green tracers instead.

Identical to standard 30-round steel magazines but fully loaded with yellow tracers.

Also identical to standard 30-round steel magazines but completely loaded with green tracers instead.

Identical to the AK-12's 75-round drums but made from different materials and intended for use with the AKM.

Identical to the AKM's regular tracer magazines but with a total capacity of 75-rounds instead.