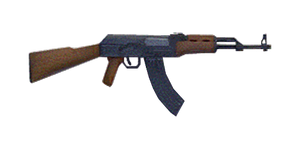 The AK-47 is a 7.62 mm assault rifle used exclusively by the Nogovan Partisans in ArmA: Cold War Assault.

The AK-47 is a gas operated, selective fire assault rifle that is chambered to fire the 7.62×39 mm round.

It loads from 30-round curved steel magazines, and can attain a fire rate of up to 600 rounds per minute with a muzzle velocity of 700 m/s. It has slightly obstructive ironsights, but is otherwise a very simple weapon to use that has an effective range of up to 300 metres.

Formerly the service weapon of the Soviet military, the AK-47 is the outdated predecessor of the AK-74 assault rifle.

However, when compared to the newer AK-74, the AK-47 uses an unergonomic design with cumbersome ironsights and has greater recoil. Due to the ballistics model of its 7.62 mm round, it is also less accurate when it comes to shooting at long distances. 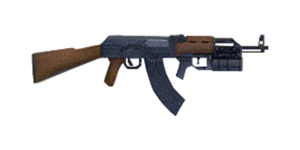 The AK-47 GL is a modified variant of the baseline AK-47 rifle that has an underbarrel grenade launcher fitted to it.

Identical to its parent counterpart in every way, the only difference is its underbarrel GP-25 grenade launcher which uses caseless 40 mm grenade rounds. The GP-25 is capable of being loaded with either high-explosive (HE) or flare rounds. 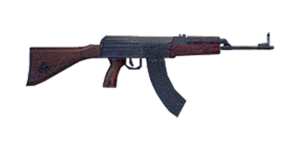 The AK-47 CZ is a locally manufactured variant of the AK-47.

Aside from being visually altered, it is functionally identical to the AK-47 and can share magazines with the former.

There are no other differences with regards to performance or usage to the parent rifle.

Both variants of the AK-47 and the AK-47 CZ retain access to the same magazine. It requires one free inventory slot to carry: