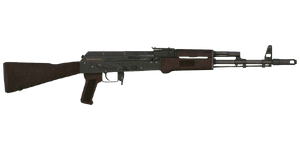 The MPi AK-74 is a 5.45 mm assault rifle used exclusively by East German military forces in ArmA 3. It was added with the release of the Global Mobilization - Cold War Germany Creator DLC.

The MPi AK-74 is a gas operated, selective-fire assault rifle chambered to fire the 5.45×39 mm cartridge.

It primarily loads from 30-round plastic magazines but can also accept 45-round curved magazines used by the LMG RPK-74. The AK-74 can attain a fire rate of up to ~ 652 rounds per minute and has a muzzle velocity of 900 m/s. It can be fitted with dovetail-compatible scopes/night sights as well as bayonets but isn't able to mount any suppressors.

A locally produced variant of its original Soviet-made model, the MPi AK-74 is carried by all East German line infantry. It is significantly lighter than its West German counterpart and is undoubtedly superior in close quarters due to its higher rate of fire and larger magazine capacity.

In many respects, it can be considered to be a 5.45 mm-chambered MPi KM-72 as the MPi AK-74 has virtually identical recoil, can mount optical sights by default, and is not limited to using a carryhandle like the U.S.-made M16A2. Its magazines are also relatively lightweight to store and impose minimal burden upon the user's stamina.

Consequently, the 5.45 mm round it fires is quite lacklustre and its stopping power doesn't quite match the G3 or the KM-72's 7.62 mm cartridge. Accuracy-wise, the AK-74 has much higher dispersion than the M16A2 and does not even come close to the G3's precision; a factor which becomes very noticeable against targets located 400 metres or further away. 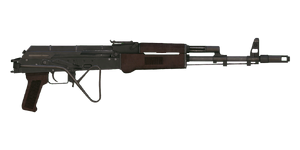 The MPi AKS-74 is a modified AK-74 rifle with a side folding metal stock.

Compared to regular AK-74 rifles, it is slightly lighter to wield since it no longer uses a fixed stock like its parent weapon. For close quarters, its inertia penalty has also been reduced by ~ 16%.

In all other aspects, it remains unchanged from the basic AK-74 rifle. 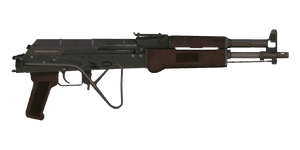 The MPi AKS-74K is another derivative of the AK-74 rifle but is designed with a carbine-style configuration and utilises a shorter barrel.

As with AKS-74s, it has a ~ 16% lower inertia penalty thanks to the side folding metal stock. In addition, it is even lighter to carry due to the compensator's removal.

However, one consequence of its shortened barrel is that the AKS-74K suffers from a sharply lowered muzzle velocity of 738 m/s, effectively cutting its range down to less than ~ 400 metres.

NOTE: All variants of the MPi AK-74 can load the same magazines utilised by non-Global Mobilization 5.45 mm-chambered weapons. To minimise clutter, they are deliberately excluded from this section.

All three variants of the AK-74 can load eight types of magazines; four are standard 30-round plastic magazines while remaining four are 45-rounder curved magazines shared with the LMG RPK-74 light support weapon.

The basic 30-round magazines each weigh 12.24 "mass" while the 45-rounders weigh 18.35 "mass". They are available in either Orange or Plum colour schemes:

Identical to regular 30-round magazines but with visible tracer rounds loaded.