The AKM is used by several Independent and OPFOR factions in ArmA 2. 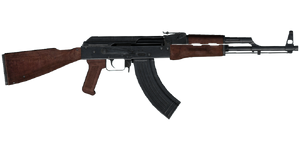 The AKM is a Russian-made gas operated assault rifle developed in the 1950's that is chambered to fire the 7.62×39 mm round.

It loads from 30-round curved steel magazines and can achieve a rate of fire of up to 600 rounds per minute, with a muzzle velocity of 710 m/s. The AKM lacks the ability to mount accessories and does not come in any variation that has optical sights or muzzle attachments.

The AKM has good stopping power and range for a weapon of its class, but is generally inferior when it comes to recoil management and accuracy as opposed to its 5.45 mm counterpart, which limits the AKM's range to roughly 400 metres or less.

In addition, its front sight post is quite small and less ergonomic to aim with. The lack of sub-variants with optical sights fitted also makes the AKM a poor choice for long distance firefights, especially when compared to modernised 7.62 mm rifles that have the ability to mount riflescopes.

The AKM can load two types of magazines. They both take up one inventory slot:

Standard 7.62 mm curved magazine. Does not contain any visible tracers.

Intended for use with the Sa-58 rifle. Completely identical performance-wise to regular AKM magazines. 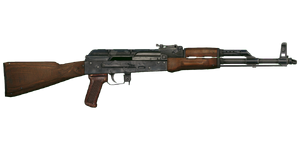 The AKM is used by several Independent, BLUFOR and OPFOR factions in ArmA 3. It was added with the release of the Apex DLC.

The AKM returns in ArmA 3, and remains mostly unchanged compared to its predecessor.

It still loads from 30-round curved steel magazines (shared with the AK-12) and has an identical fire rate. Its muzzle velocity also remains unchanged at 715 m/s. Like its ArmA 2 counterpart, the ArmA 3 AKM lacks the ability to mount accessories and cannot be fitted with muzzle attachments.

Essentially a low-tech counterpart of the AK-12, the AKM is (slightly) lighter than its latest generation model and hits just as hard due to being chambered in 7.62 mm.

Although it can be zeroed up to 800 metres, the effective range of the AKM falls under roughly ~ 400 metres due to its high dispersion at long distances.

In practice however, its real effective range is actually limited to 250 metres or less due to its unergonomic ironsights. This renders it ill-suited for anything outside of close/medium range firefights.

The AKM can load ten types of magazines ranging from 30-round rifle magazines to 75-round drums. The former weigh a total "mass" of 10 units each, while the latter take up 26 units instead.

Magazines intended for use with the AKM do not retain any alternate camouflage options. Only the AK-12's polymer magazines (both rifle and drum) feature optional schemes in the form of the standard Black, Arid desert and Lush woodland camouflage schemes:

Standard 7.62 mm ball ammunition stored in a curved steel magazine. The last four rounds will always consist of yellow tracers and can be seen without night vision.

Identical to regular 7.62 mm AKM magazines, the only difference being that the last four rounds consist of green tracers instead.

Identical to standard 30-round steel magazines but fully loaded with yellow tracers.

Also identical to standard 30-round steel magazines but completely loaded with green tracers instead.

Aside from its weight and capacity, it is completely identical to the basic rifle magazines in all other aspects.

Identical to the AKM's 75-round drums but containing visible green tracers.

Also remains identical in all other aspects aside from the loaded tracer rounds.

7.62 mm ball ammunition stored in a polymer magazine intended for use with the AK-12. The last four rounds will always consist of green tracers.

Green-coloured tracer ammunition (for all 30 rounds of the magazine). They are fully visible to the naked eye.

Intended for use with the RPK-12 light support weapon.

Save for appearance and lack of camouflage options, there are no differences to the AKM's regular 75-round drums.

Also identical to the AKM's 75-round tracer drums but intended for the RPK-12 instead.