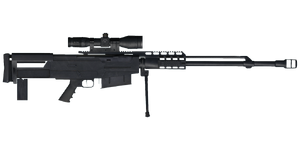 The AS50 is a 12.7 mm anti-materiel sniper rifle used by both British Army snipers and ION PMCs in ArmA 2. It was added with the release of the British Armed Forces DLC.

The AS50 is a semi-automatic, gas operated anti-materiel rifle chambered to fire the 12.7×99 mm NATO round.

It primarily feeds from 5-round box magazines designed specifically for the AS50, but can also be loaded with the same 10-rounders used by the American M107.

It can attain a fire rate of up to 240 rounds per minute and has a muzzle velocity of 936 m/s. The AS50 has an integrated (non-functional) bipod attached just beneath the barrel, and is fitted with either a regular magnified riflescope (that has a magnification strength range of 3x-12x) or a thermal scope. It can be zeroed up to a distance of 1,600 metres.

The AS50 is essentially the British Army's counterpart to the M107 sniper rifle used by the U.S. military. Compared to the M107, the AS50 has a higher muzzle velocity that gives it better accuracy over long distances. It has a maximum effective range of up to 1,800 metres, though this can be extended to 2,000 metres depending on the shooter's current elevation.

As with the M107, the AS50's 12.7 mm round is extremely powerful and allows the operator to kill any infantry target in one shot regardless of where the round impacts. Likewise, unarmoured and light vehicles can be quickly disabled with a few rounds to the engine.

Its only drawback is that it uses 5-round magazines as opposed to the M107's 10-round boxes. However, the AS50 is capable of loading both types of magazines which can negate the issue with it having a smaller magazine size (assuming that M107 magazines can be readily obtained).

The AS50 can be fed with two types of magazines. It only requires one free inventory slot to carry:

Alternate magazine shared with the M107. It is loaded with .50 BMG rounds which are fired with a lesser velocity of 850 m/s instead.

Brian Frost with the AS50.