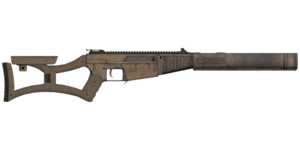 The ASP-1 Kir is a 12.7 mm special purpose marksman rifle used by both Mediterranean CSAT forces and Russian Spetsnaz operatives in ArmA 3. It was added with the release of the Marksmen DLC.

The ASP-1 Kir is a semi-automatic, integrally-suppressed special sniper rifle chambered to fire the subsonic 12.7×54 mm round.

It loads from 10-round box magazines, and can attain a fire rate of up to 600 rounds per minute with a muzzle velocity of just 290 m/s. It accepts accessories on all three of its rails: top, side and underbarrel, but cannot be fitted with any muzzle attachments as it uses an integral suppressor.

The ASP-1 is primarily used by both CSAT recon teams and Russian Spetsnaz for covert operations that require a discreet, short-ranged marksman weapon.

It is exceptionally powerful and can be used to take out even heavily armoured infantry in one or two shots (albeit at close ranges only). It is most effective when paired with the DMS optic, as it is the only scope that can be ranged down to 100 metres.

However, it should be noted that the ASP-1 is neither a true DMR nor sniper weapon. It should not be used to engage targets more than 150 metres away as the subsonic round's power drops-off very quickly the further it travels. In addition, the extremely wide trajectory of the round's ballistic model makes it almost impossible to attack long range targets with.

There is only one type of magazine available for the ASP-1 to load. It weighs in at a total "mass" of 12 units:

Box mag loaded with specialised 12.7 mm subsonic ammunition. Does not have any visible tracer rounds loaded.

DLC preview render. Note the silhouette portraying a NATO infantryman as opposed to a CSAT soldier. 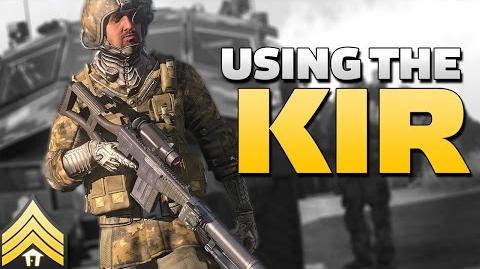