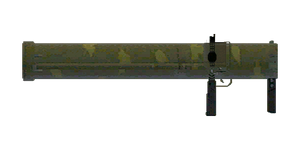 The AT-4 Spigot is a 120 mm missile launcher used exclusively by Soviet military forces in ArmA: Cold War Assault.

The AT-4 Spigot is an unguided, portable and reloadable anti-tank missile launcher.

It can only load 120 mm missiles fitted with high-explosive anti-tank (HEAT) warheads, and has a maximum effective range of approximately 600-700 metres.

Like its American counterpart, the AT-4 served as the standard-issue heavy anti-tank weapon used by the Soviet Armed Forces at the height of the Cold War.

Performance-wise, it is nearly identical to the Carl Gustav in almost every way, with both being powerful enough to destroy any non-heavy tank vehicle in just one hit, and also being capable of disabling a heavy tank like the M1A1 with a direct impact to the front or side of the hull.

The AT-4 also shares the same drawback as its American counterpart however, and is generally less useful on the move due to the limited amount of missiles that its operator can carry. Just like the Carl Gustav, an AT-4 user is always restricted to carrying just one missile at a time since each missile occupies six inventory slots at once.

This basically makes the AT-4 a single shot-only weapon unless they manage to resupply somehow, or alternately, have other members of the squad assist in carrying spare missiles. However, this in turn puts a strain on the total ammunition supply for the entire squad, as each missile brought along means six less magazines for each member's primary weapon.

Regardless, if employed in a defensive position with a readily-available stockpile of missiles nearby, the AT-4 becomes an extremely deadly threat to every ground vehicle. A small group of AT-4 operators defending a position will be almost impossible to break through for armoured ground vehicles without suffering severe losses in return.

The AT-4 can only load one type of missile. Each missile occupies six inventory slots:

Missiles are always launched with an initial velocity of 30 m/s. They take a further 1.5 seconds to reach a maximum speed of 200 m/s in mid-flight. The warhead itself has a blast radius of 2.5 metres. 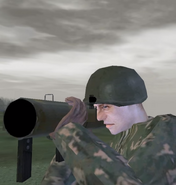