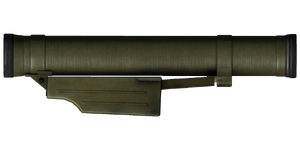 The Metis-M 9K115-2 is a 130 mm missile launcher used by the Russian Armed Forces and the Takistani Army in ArmA 2.

The 9K115-2 is a shoulder-launched, wire-guided, anti-tank missile launcher.

It is available in two variants: a static tripod-mounted variant and the man-portable version. Both are designed specifically to load 130 mm missiles fitted with high-explosive anti-tank (HEAT) tandem warheads and has a practical effective range of up to 1,500 metres, with a maximum range of 2,000 metres. The launcher uses a magnified optical sight that has a fixed zoom strength of 2x, and can toggle either a normal day or orange-hot thermal vision modes.

The 9K115-2 is the direct counterpart to the American-made Javelin ATGM. Unlike the Javelin however, the 9K115-2's seeker is designed to utilise SACLOS guidance instead which removes the need to lock-on before firing. Thanks to this, it can hit ground vehicles at almost any distance - provided that the user can see and maintain their aim for the duration of the missile's flight.

While the 9K115-2's HEAT warhead is not as powerful as the Javelin's, it compensates by not requiring a lock-on in order to fire its missile. This means that it can be quickly deployed in an ambush without the need to wait for the seeker to acquire a target first.

Nonetheless, the 9K115-2 still has several other drawbacks compared to the Javelin. Aside from its missiles for the man-portable variant weighing exactly the same as its American counterpart (six slots per missile), the 9K115-2's reliance on SACLOS means that the operator must always maintain a steady aim at their target at all times.

The Javelin on the other hand, is a fire-and-forget weapon and will only miss if the target manages to reach defilade or outmanoeuvres the missile somehow. The static 9K115-2 will easily go off-course from its flight path if the user so much as twitches for a split second in the wrong direction.

For both variants, the 9K115-2's missile also tends to behave erratically once it flies past a certain distance (roughly ~ 1,650 metres), and becomes almost uncontrollable even if the user kept a steady aim for the entire duration of the missile's flight.

The Metis AT-13 launches the same HEAT missiles as its portable version, and can only be guided manually via SACLOS. The launcher sight retains the same fixed magnification and thermal optics.

Up to six missiles are available to fire, with one always pre-loaded by default. It takes a total of 8 seconds to reload another missile.

Missiles are always hard launched, have an initial velocity of 55.16 m/s and take only 1.5 seconds to reach a top speed of 200 m/s in mid-flight.

It should be noted that only Takistani launchers can be disassembled into a man-portable backpack form (divided into separate launcher and tripod components); Russian Metis AT-13s cannot be reassembled/disassembled.

Both variants of the launcher only support a single missile type. Missiles for the man-portable version take up to six primary weapon magaazine slots:

The missile is soft-launched and takes at least 0.25 seconds for its motor to ignite. The motor will continue gaining thrust (starting at 55.16 m/s) and will reach a top speed of 200 m/s after just 1.5 seconds of flight time. The warhead only has a blast radius of 1.5 metres.

The static version's missile retains the same flight characteristics but is hard launched rather soft-launched.