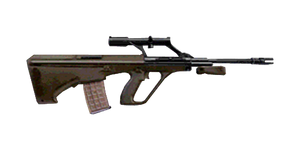 The AUG A1 is a 5.56 mm assault rifle used by both U.S. military forces and in limited numbers with the Nogovan Partisans in ArmA: Cold War Assault.

The AUG A1 is a gas operated, selective-fire bullpup assault rifle that is chambered to fire the 5.56×45 mm NATO round.

It loads from 30-round plastic magazines, and can attain a fire rate of up to 857 rounds per minute with a muzzle velocity of 970 m/s. It has an effective range of between 300 and up to 500 metres.

Used in limited numbers by U.S. forces deployed to Malden, the AUG A1 is the Austrian counterpart to the German-made G36 assault rifle.

Both functionally and handling-wise, the AUG A1 it is quite similar to the G36. Like the G36, it uses an integrated optical scope that has a magnification strength of 1.5x, and has almost identical stopping power, recoil, and range.

As such, it is undisputedly one of the two best assault rifles in Cold War Assault, far outstripping the M16A2 when it comes to range and also having the advantage of a magnified scope like a sniper rifle (though lacking the variable zooming capability of the M21).

Its only drawback is that it cannot launch rifle grenades or feature a dedicated sub-variant fitted with an underbarrel grenade launcher. In close quarters, the scope can also prove to be a hindrance rather than help since aiming with it cumbersome, forcing the user to rely on their crosshairs (if available) rather than the scope's reticle.

The AUG A1 can only be loaded with one type of magazine. Each magazine occupies one inventory slot: