The AV-8B Harrier is a V/STOL-capable fighter jet featured in both ArmA: Armed Assault and ArmA 2.

The Harrier is a fixed-wing, V/STOL-capable, single engine multi-role fighter that uses a composite wing layout.

Armament
By default, the AV-8B is always armed with a 25 mm cannon that is loaded with 300 rounds of high-explosive (HE) ammunition.

Its primary armament comes in the form of four air-to-air AIM-9X missiles. An alternate loadout consists of six laser-guided GBU-12 bombs instead.

Features
Designed with V/STOL capability in mind, the Harrier is capable of taking off and landing on almost every flat surface without the need to operate from an airfield.

Unlike the A-10, the Harrier is intended to be used for either ground attack or air interdiction roles depending on its loadout. Provided that ground forces paint targets with a laser designator, the Harrier can safely bombard targets at a safe altitude without needing to fly in close.

Thanks to its V/STOL capability, the Harrier also does not require an airfield to take off from or land (unlike the A-10), which minimises its logistical footprint.

Drawbacks
Neither variant of the Harrier carries air-to-ground anti-tank missiles, which limits its usefulness outside of bombarding stationary targets or shooting down helicopters.

It also cannot fulfil both air-to-air interception or ground attack simultaneously since it lacks the necessary number of hardpoints to carry ordnance for both roles.

Crew Capacity
The Harrier only contains a single seat for the pilot. It is unable to transport any additional crew or passengers. 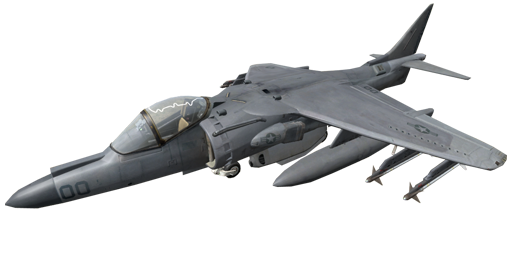 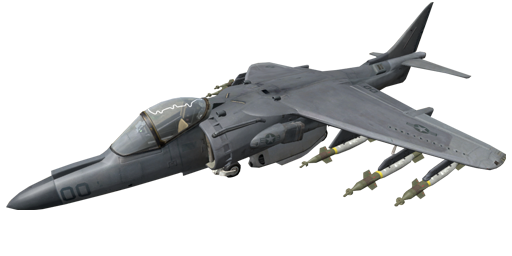 Identical to the baseline variant but carries six GBU-12 laser-guided bombs instead.

Both variants of the Harrier have base armour values of 40.

Harriers can withstand up to 40 points of damage.

All weapon systems are controlled by the Harrier's pilot on both variants:

25 mm Gatling cannon. Fires HE shells that are useful against other aircraft for Within Visual Range (WVR) dogfights.

NOTE: Only available on the AV-8B (A2A) variant.

The AIM-9X has a firing delay of 0.1 seconds in-between launches. Assuming that the AV-8B is rearming from a logistical vehicle, it takes a full 30 seconds to rearm all missiles.

Launched missiles take 10 seconds for their motors to reach a top speed of 500 m/s in mid-flight. The warhead itself has a blast radius of 7 metres.

NOTE: Only available on the AV-8B (GBU) variant.

Laser-guided bombs. Can be optionally employed as unguided gravity bombs instead.

GBU-12s have a blast radius of 12 metres and will instantly destroy any ground vehicle with a direct/indirect hit.

The AV-8B Harrier is used exclusively by U.S. Marine aviation wings in ArmA 2.

The Harrier in ArmA 2 remains mostly the same as its predecessor in Armed Assault, though it now carries a more balanced loadout by default.

Armament
The Harrier's standard armament consists of a 25 mm cannon loaded with 300 rounds of HE shells.

Alternatively, it can be armed with up to six laser guided bombs instead in its CAS role.

Features
Unlike its predecessor, the baseline variant of the ArmA 2 Harrier exchanges its pure air-to-air loadout for additional unguided weaponry in the form of dual rocket pods.

Compared to its stealthier counterpart, the Harrier is far more useful and is highly efficient at providing CAS thanks to its diverse array of air-to-ground munitions.

Depending on its loadout, the Harrier can now be optimised to strike large clumps of soft targets with a combination of rocket fire and iron bombs, or be used to specifically attack hard targets with guided bombs.

Although its wing pylons cannot be fitted with anti-tank missiles like the A-10, the Harrier makes up for it by being able to carry up to six GBU-12s at once; provided that it's using its LGB loadout.

As long as ground forces or airborne FAC-oriented assets (like the UH-1Y) are nearby to lase a target, the Harrier can take out almost any kind of ground threat.

Drawbacks
However it should be noted that the Harrier has relatively poor aerodynamics, and lacks the agility or speeds of the F-35 and its Russian counterpart. In addition to this drawback, attempting to hover in VTOL mode is extremely difficult compared to the F-35.

The Harrier's controls essentially lock up and become nigh impossible to control while VTOL is engaged; simply adjusting the Harrier's angle and heading becomes an arduous task that can potentially result in the Harrier veering off into a structure or landing upside down.

As such transitioning to vertical flight should only be done when landing or taking off after the Harrier has been lined up perfectly.

Crew Capacity
The Harrier only contains a single seat for the pilot themselves. It is unable to transport any passengers or additional crewmen. 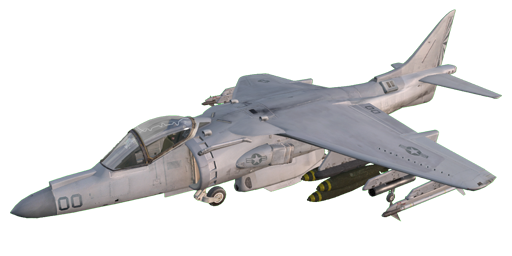 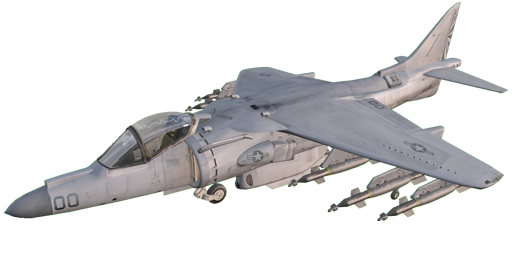 Identical to the baseline model but exchanges all of its weapons and munitions (aside from the 25 mm cannon) for six laser-guided bombs.

Both variants of the Harrier have base armour values of 40.

Harrier hulls can only survive up to 40 points of damage. Depletion of the hull's integrity will instantly result in a total loss.

The Harrier's pilot controls all weapon systems on both variants:

Useful against clumps of infantry and stationary ground vehicles. The bombs themselves have a blast radius of 12 metres and can destroy most ground vehicles in a single hit.

Unguided 70 mm rockets. Useful against groups of infantry and unarmoured/lightly-armoured ground vehicles. Rockets are always launched in pairs and contain high-explosive (HE) warheads.

There is a delay of 0.2 seconds in-between volleys (300 RPM) and rockets are launched with an initial velocity of 44 m/s. It takes a further 1.1 seconds before the motors can reach their top speed of 740 m/s in mid-flight. The warheads have a blast radius of 12 metres.

Infrared-guided air-to-air missile. Has a maximum lock-on range of 9,000 metres.

There is a delay of 0.1 seconds in-between missile launches. 30 seconds will be required to reload a fresh batch of missiles at a logistical vehicle (assuming the Harrier has run out). It takes a total of 5 seconds for the missile's motor to reach a top speed of 828 m/s in mid-flight.

The seeker has a 20% chance to lose lock against flare countermeasures. Its warhead has a blast radius of 10 metres.

NOTE: Only available on the AV-8B (LGB) variant.

Laser-guided bomb. Can be optionally employed as an unguided gravity bomb instead.

There is a small delay of 0.2 seconds in-between bomb drops. The bombs themselves have a blast radius of 12 metres, and are capable of destroying any ground vehicle in a single hit.

The Harrier has an integrated Missile Approach Warning System, and will warn the pilot of incoming missiles that are already in mid-flight and homing onto it.

The Harrier possesses a Radar Warning Receiver, and will alert the pilot of being locked-onto by radar-based targeting systems.

The Harrier lacks an Infrared Warning Receiver, and will not warn the pilot of being targeted by infrared-based weapon systems.