The AWC Nyx (full name: Armoured Weapons Carrier) is a multi-purpose Light Tank used exclusively by the AAF in ArmA 3. It was added with the release of the Tanks DLC.

This is a premium asset that requires ownership of the Tanks DLC.

Features
Aside from the baseline Autocannon-armed direct fire and scout variant, it is available in three more configurations; a SHORAD model that carries surface-to-air missiles, a dedicated reconnaissance variant fitted with a compact radar, and lastly, an anti-vehicle weapons carrier.

Designed with modularity in mind, the Nyx is a highly versatile vehicle platform that can be categorised as both a light tank and fire support vehicle. The Nyx is able to assume almost any kind of role depending on its configuration, provided that right variant is chosen to be deployed into combat.

Mobility
Extremely fast and manoeuvrable for a vehicle of its size, the Nyx can easily dart from position to position without being noticed, and can change direction extraordinarily quickly even at high speeds.

Notable Traits
Since its hull is quite small and the engine is fairly quiet to operate, this also makes it difficult to visually identify or hear from afar without the use of thermal sensors, which makes it an excellent reconnaissance vehicle in any variant.

Drawbacks
Its main drawback is its near-complete lack of effective armour plating. The Nyx itself cannot resist much damage from almost any kind of weapon, with heavy calibre fire being capable of disabling the turret and penetrating the hull.

A single round from any kind of tank cannon, shoulder-launched anti-tank weapon (i.e. the RPG-7), or a few autocannon shells (both armour piercing and high-explosive) can and will instantly destroy it. Simply put, staying alive with the Nyx is fairly straightforward - stay hidden and avoid getting spotted.

Without a slat cage attached, all variants of the Nyx are also quite prone to being damaged by the environment. Crashing into terrain obstacles like moderately-sized rock formations or large trees can simultaneously damage the Nyx's hull/engine and injure the crew.

Crew Capacity
Regardless of the variant, all models of the Nyx only have enough seats to transport a crew of two, the driver and a commander who also doubles as a gunner (or radar operator in the case of the Recon variant). It is unable to transport any additional passengers. 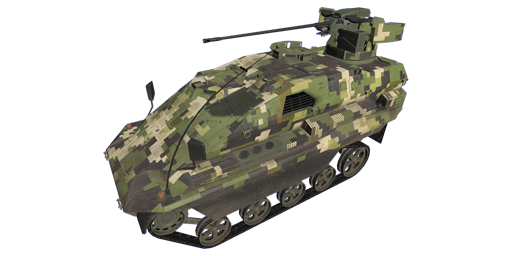 Armed with a 20 mm autocannon and 7.62 mm coaxial MMG. The autocannon has 120 rounds worth of high-explosive (HE) and 120 armour-piercing (AP) shells, for a combined total of 240 shells. Each munition type feeds from 60-round belt "magazines". The coaxial MMG is pre-loaded with one 200-round belt, and has a further two belts in reserve totalling 600 rounds.

Notably, the commander's optics on this model are the best out of all versions, which makes it quite efficient at providing long-range reconnaissance. 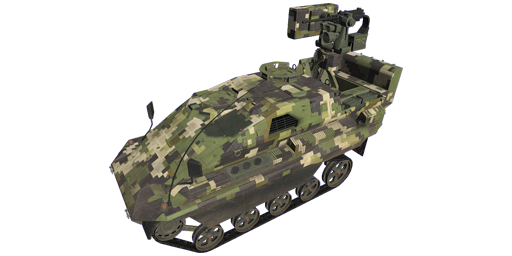 The turret is armed with a 12.7 mm heavy machine gun and has a missile pod mounted adjacent to it that carries four infrared-guided FireFIST ATGMs. The HMG feeds from a 100-round belt box and has a further three belt boxes spare (for a total of 400 rounds).

The FireFIST missile pod on the other hand is pre-loaded with two missiles, and has four more missiles that it can reload with. 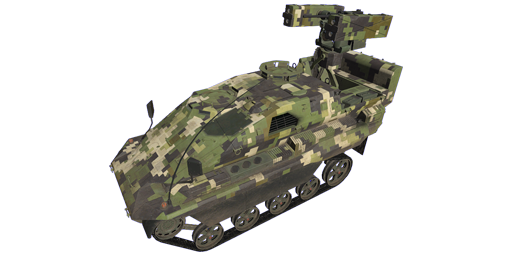 It is also armed with a 12.7 mm HMG like the AT variant, but the adjacent missile pod carries eight SAAMI short-range, heatseeking, surface-to-air missiles instead (it should be noted that the AA missiles are loaded as 4-round "magazines"). The HMG carries the same total amount of belt boxes as the AT variant. 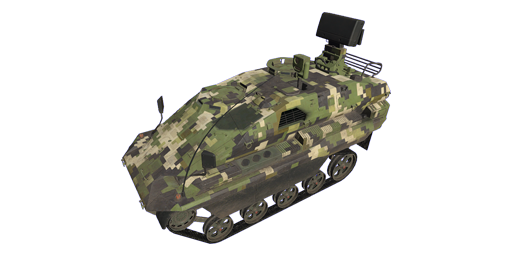 This variant lacks a turret and forgoes any kind of armament in exchange for a compact radar. The commander has access to a laser designator that can be used to mark targets for friendly ground forces or aircraft, along with a retractable periscope fitted with a camera.

(*) Changes are only visible if the Nyx has the Camo Net component attached to it.

The Nyx has a base armour value of just 150 and uses Composite Armour-based plating.

No variant supports being fitted with Explosive Reactive Armour blocks/panels, though eight individual slat cages can be attached onto any variant, shielding all sides of the hull. The turret is not covered by slat cages on any variant.

The following highlighted positions serve as weak points on all Nyx variants:

Note that only the Autocannon-armed variant is depicted here. With the exception of whether the Nyx is armed or not, hit zones remain completely identical on all other parts of the tank(s) regardless of variant.

In addition, to inflict actual damage on a component a munition must first penetrate through the surrounding armour plates and directly hit its weak point. Any strikes on non-highlighted parts will cause little (if any) noticeable damage.

The hull can resist up to 300 points of damage. Will cause a catastrophic kill if fully depleted.

Slat cages protect all sides of the hull. They can resist up to 200 points of damage before failing.

Large calibre HE-based munitions or missile/rocket fire will always inflict twice as much damage on the cages, and will almost always be destroyed in a single hit.

The engine can only incur a meagre 15 points of damage before failing.

20% of incoming damage onto the engine is always inflicted onto the Nyx's "health" pool. It will not however, cause a catastrophic kill if destroyed unless the Nyx is critically damaged.

If damaged: Reduces power output, acceleration is decreased and it may become impossible to climb uphill.
If destroyed: Instantly immobilises the Nyx.

The fuel tank can resist 75 points of damage before rupturing.

Only 10% of incoming damage onto the fuel tank is shared with the Nyx's main "health" pool. A destroyed fuel tank will not cause a catastrophic kill unless the Nyx is critically damaged.

If damaged: Gradually leak fuel over time but will stop at a threshold of 90% of the Nyx's remaining fuel capacity.
If destroyed: Rapidly lose its entire fuel capacity over several seconds.

Both treads can resist 250 points worth of damage. No amount of damage inflicted on them is transferred onto the Nyx's "health" pool.

The turret on all variants can only survive 120 points of damage. No amount of damage incurred is transferred onto the Nyx's "health" pool, however.

If the turret's armour has been compromised, no reductions will be applied to the velocity/raw damage of incoming projectiles.

The gun barrels on both autocannon and HMG-armed variants are only capable of surviving 90 points of damage. No damage inflicted on this component is shared with the Nyx's main "health" pool.

Destroying the barrel will lock it and prevent the gunner from being able to adjust its elevation/depression. It should also be noted that unlike the turret, the barrel is only capable of reducing 80% of incoming damage from high-explosive (HE) munitions.

The commander's optics can only withstand a mere 15 points of damage before failure. It is susceptible to small arms fire and has no resistance against explosives. Destroying this component does not affect the Nyx's "health" pool, however.

If disabled by enemy fire, the commander will no longer be able to utilise the periscope for viewing.

The Nyx is able to utilise two types of sensors, both active and passive. However, only two specific models of the Nyx (AA and Recon) are outfitted to utilise them:

NOTE: Only the AA variant of the Nyx is data link-capable.

The Nyx is data link-capable, and can transmit the locations of radar contacts to all friendly forces within 16 km range.

NOTE: Only the Recon variant of the Nyx uses an active radar.

The Nyx has an active radar range of 8 km against aerial targets, and 4 km against ground targets. Azimuth coverage is a full 360 degrees but is vertically restricted to an elevation of just 100 degrees.

Targets can be identified once they reach a minimum distance of 3 km.

The Nyx's gunner position controls the remotely-operated turret on all armed variants. For optics, they have access to three fields of view and can toggle a day, night or black-hot/white-hot thermal vision mode:

NOTE: Only available on the AWC 304 Nyx (Autocannon) variant.

20 mm autocannon. Can load either HE or AP-type rounds.

It can attain a fire rate of up to 300 rounds per minute. Accuracy-wise, the Cannon 20 mm will differ depending on the type of munition loaded; for AP rounds, it has a dispersion 0.0009 rad but for HE it is higher at 0.0018 rad instead. There is no delay for switching between munition types but it requires 40 seconds to reload a fresh linked belt.

The Cannon 20 mm's Fire Control System does not feature automatic lead/zeroing. It can however, be manually adjusted beginning at 100 m all the way up to a maximum of 2000 m (rising in 100 m increments).

NOTE: Only available on the AWC 304 Nyx (Autocannon) variant.

Coaxial 7.62 mm medium machine gun. Has an effective firing range of between 300 metres up to a maximum of 1,200 metres.

It has a fire rate of 800 RPM and takes 10 seconds to reload a fresh belt. The Coaxial MG always has a fixed dispersion of 0.0016 rad regardless of range. The FCS can only zero against targets moving at speeds of up to ~ 110 km/h. It has an imposed delay of 1 second before it can finish adjusting.

The FCS is only able to automatically zero on stationary targets and requires 1 second to finish adjusting. Manual zeroing is also possible, though only in increments of 100 m up to a maximum of 2000 m.

FireFISTs are hard launched with an initial velocity of 19 m/s, and can reach a top speed of 200 m/s in mid-flight (their motors require 6 seconds of flight time to attain this speed).

The missile's seeker is only capable of locking onto targets at distances of up to 4,500 metres away and are moving at speeds of 150 km/h or less. The seeker on both the launcher and the missile itself have a 70% chance to lose lock against smoke countermeasures.

The warhead is of a tandem high-explosive anti-tank (HEAT) type. The initial shaped charge has a blast radius of 4 metres, while the kinetic submunition has a launch velocity of 1,000 m/s and a penetration depth of 900 millimetres.

Missile uses a linear flight trajectory. This is the default flight mode.

Once launched, the missile will transition between two phases:

The missile has a minimum targeting range of 150 metres in this mode. If the target is not beyond this distance, it will default to direct-attack mode instead.

Should the missile's lock-on be broken in either phase, the FireFIST will usually default to striking the target's last known position. However, it is not possible to manually control the missile if it loses track of the target.

Locks on exclusively via infrared. There is only a 1 second delay in-between missile launches, but the launcher pods require up to 50 seconds to rearm another batch of SAAMIs.

Missiles are always hard launched with an initial velocity of 120 m/s and take a further 2.25 seconds to reach a top in-flight speed of 850 m/s. The seeker has a maximum lock-on range of 8,000 metres, and can only target aircraft flying at speeds of 900 km/h or less.

The launcher's seeker has a 50% chance to have its lock broken by flare countermeasures, but the seekers on the missiles themselves only have a 10% susceptibility to flares. The warheads are high-explosive (HE) based and have a blast radius of 6 metres.