Andrew MacKinnon was a supporting character in ArmA 3's Prologue and The East Wind campaigns.

The commanding officer of NATO's multi-national Task Force Aegis deployed to the Republic of Altis and Stratis, MacKinnon went by the callsign of Broadway.

He was deployed alongside the rest of NATO's peacekeeping force to the country following the outbreak of fighting between government forces, and an insurgency group that called itself the Freedom and Independence Army (FIA).

On top of directing the task force, he also acted as NATO's liaison to the AAF. He cooperated extensively with the AAF's commander (and the country's leader), Georgious Akhanteros, supervising troop movements and tactics, while also serving as a third-party mediator between the new Altian government and the FIA.

In reality however, MacKinnon's (and that of the task force) role was purely symbolic in nature.

As even though the entire purpose of the deployment was to prevent further bloodshed between the two sides, MacKinnon could do little but protest whenever Akhanteros made an overt move against the guerillas.

However, relations between the task force and the AAF would hit a new low when MacKinnon is forced to command his subordinates to step aside during a high-profile incident in the capital of Kavala. Following the suppression of a supposed FIA-initiated uprising in the city by the AAF, Akhanteros ordered the execution of a group of detained guerillas.

MacKinnon protested against the action, but was unable to countermand Akhanteros' (CSAT-backed) decision. He is forced to begrudgingly issue the order to all NATO forces to simply allow the killings to continue.

One year later, the task force's mandate is gradually rescinded and are restricted to the smaller island of Stratis instead, with the mainland of Altis becoming off-limits to all NATO personnel.

As their five-year long mission was drawing to a close, MacKinnon's responsibility shifted from peacekeeping to decommissioning the remaining NATO facilities on the island. The majority of combat units were already shipped out of the country, leaving MacKinnon and few other members of his commanding staff (along with mostly non-combat support troops) behind to supervise the final stages of the drawdown.

While awaiting the arrival of private military contractors to handle the rest of the process, MacKinnon suddenly leaves Camp Rogain and quickly drives off in the direction of the Kamino Firing Range for unknown reasons.

Along the way, his MRAP is hit by an explosion and is flipped over onto its side. Heavily injured, MacKinnon climbs out of the vehicle and begins crawling in the direction of Kamino before passing out from his wounds.

Moments later, Corporal Ben Kerry and Staff Sergeant Thomas Adams drive along the same route that MacKinnon took on the way to Kamino. They spot MacKinnon's overturned MRAP and his body lying in the middle of road, and immediately stop to find out what happened. Adams checks MacKinnon's vitals and tries to resuscitate him, but it becomes immediately clear that MacKinnon's already too far gone.

A month later, MacKinnon is mentioned in passing on news reports and by members of the 111th Infantry Division (111th ID), who are deployed to the country in response to the AAF's subsequent "retaliatory" attack against the task force.

Who or what exactly caused MacKinnon's death continues to remain a mystery.

MacKinnon is a middle-aged, Caucasian male with short, dark brown hair. He has a lightly shaved beard, and wears the standard attire of an officer that consists of MTP-camouflaged fatigues, a Patrol Cap, and a ranger green-coloured bandoleer.

A tireless individual, MacKinnon was a dutiful officer who tried to maintain the balance between keeping the peace and following orders. He had a slightly sarcastic side to him, and poked fun at his subordinates on occasion.

Like the troops under his command, MacKinnon was also critical of the Altian regime under Akhanteros and was highly dismissive of their actions. But as an officer; not to mention being the task force's liaison to the AAF, he had to keep his opinions to himself and was mostly powerless to stop their actions. 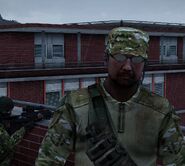 MacKinnon at the Ministry of Defense in Kavala at the start of Rising Tensions.