The Army 4x4 is a Light Utility Vehicle used by both RACS military forces and Sahranian law enforcement officers in ArmA: Armed Assault.

The Army 4x4 is a four-wheel drive, British-made off-road vehicle.

Features
It is available in two more variants besides the baseline troop transport model, an open-topped model (also shared with law enforcement officers) and an armed scout variant that has a .50 cal heavy machine gun turret mounted onto it.

The primary light utility vehicle utilised by the Royal Army Corps of Sahrani, the Army 4x4 is a rugged off-road capable transport that roughly serves in the same role and capacity as the American HMMWV.

Though it lacks the modularity of the HMMWV, the unarmed variants of the Army 4x4 compensate by being able to transport two additional passengers at a time compared to the HMMWV's meagre capacity of only three (not including the driver/gunner).

Mobility
All variants of the Army 4x4 are quite fast and handle better on rough terrain compared to the SLA's UAZ.

Drawbacks
Being unarmoured, the Army 4x4 is naturally ill-suited for direct combat against other ground vehicles. Its lack of anti-tank weaponry also prevents the Army 4x4 from being able to tackle tanks and other armoured vehicles like the American HMMWV is capable of.

Crew Capacity
All variants support both a driver and a single cab passenger who sits alongside them in the front of the vehicle. The unarmed transports can carry up to five more passengers in the rear for a total of six, whereas the armed Army 4x4 is unable to transport any passengers at all (besides the cab passenger). 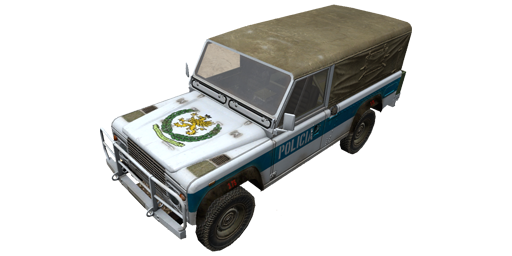 It is unarmed and can transport up to six passengers at a time. 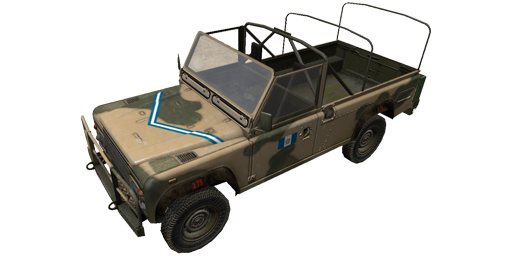 Visually identical to the baseline transport but lacks a hard roof and rear tarpaulin cover, leaving only the roll cage bars intact.

Transports the same number of passengers as the baseline transport. This variant is used by both RACS military forces and Sahranian law enforcement officers. 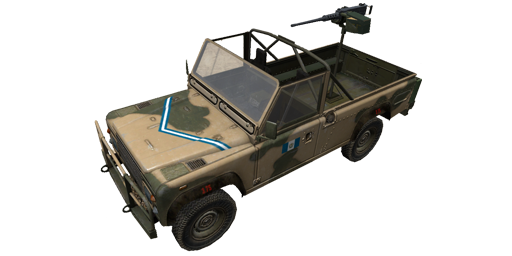 This model features an M2 .50 cal heavy machine gun fitted to the turret ring in the centre of the vehicle. It feeds from a single pre-loaded 100-round belt box and carries a further five boxes spare to reload from (for a total of 600 rounds).

It can only transport a single passenger.

All variants of the Army 4x4 have base armour values of 30.

The vehicle's hull can resist up to 30 points of damage.

The engine can incur 12 points of damage before failing.

The fuel tank can only take 9 points of damage before rupturing.

The Army 4x4's tyres will burst if they take more than 7.8 points of damage.

The gunner on the armed variant handles the turret-mounted M2 heavy machine gun:

NOTE: Only available on the Army 4x4 (M2) variant.