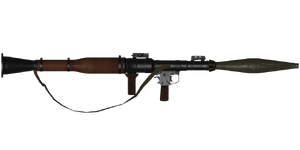 The B41 is an 85 mm anti-tank grenade launcher used by both PAVN forces and the Viet Cong in ArmA 3. It was added with the release of the S.O.G. Prairie Fire Creator DLC.

The B41 is a reloadable, shoulder-launched recoilless anti-tank weapon that is designed to fire 85 mm grenades.

It can load 85 mm grenades fitted with high-explosive anti-tank (HEAT) warheads. The B41 has an effective firing range of between 150-200 metres and an absolute maximum range of 500 metres (depending on the operator's elevation).

B41s do not have the ability to mount magnified scopes, but they do feature adjustable ironsights which can be zeroed starting at 200 metres up to a maximum of 500 metres (adjusted in 100 metre increments).

NOTE: The B41 can utilise non-S.O.G. grenade rounds designed for the RPG-7. To minimise clutter, they are deliberately excluded from this section.

B41s are limited to loading and firing only one type of grenade. It has a weight of 30 "mass" units:

PG-7V grenades are launched with an initial velocity of 115 m/s and require only 0.05 seconds of flight time to attain a top in-flight speed of 300 m/s.

The warhead's primary component has a blast radius of 3.6 metres, while its kinetic submunition can pierce armour plating up to a depth of 300 millimetres.