The BMP-1 is a tracked Infantry Fighting Vehicle used by both Soviet military forces and in limited numbers with the Nogovan Partisans in ArmA: Cold War Assault.

First entering service with the Soviet Armed Forces in 1966, the BMP-1 was the first true IFV in the world that combined the mobility and protection of an Armoured Personnel Carrier with the firepower of a tank.

Armament
It is armed with a 73 mm gun and has a coaxial 7.62 mm medium machine gun. The standard loadout of the BMP-1 provides it with 30 rounds worth of high-explosive anti-tank (HEAT) and armour-piercing (AP) shells for the main gun (15 of each type).

The coaxial 12.7 mm MMG on the other hand, is pre-loaded to feed from a single 500-round belt and has no spare belts to reload from. The ATGM launcher carries up to 5 missiles at a time, and is pre-loaded with a single missile by default (for a combined total of 6 ATGMs).

Features
The mainstay of the Red Army's mechanised formations, the BMP-1's combination of a 73 mm gun coupled with ATGMs makes it far superior to the American M113 in every way.

For example, while the baseline variant for both vehicles transport the same number of passengers, the BMP-1 retains more armour and fares slightly better against anti-vehicle weapons. It can survive a direct hit from the M72 LAW (though it will be severely damaged afterwards) whereas the M113 won't be able to resist even a single rocket from an RPG-75NH.

Likewise, the BMP-1 packs a 73 mm cannon instead of a simple heavy machine gun, and can alternate between firing anti-personnel/anti-vehicle shells. Finally, although it is obviously not recommended to do so, the BMP-1 can fight back against tanks like the M60A3/M1A1 as a last resort if there is no support available to assist the crew.

Mobility
The BMP-1 is amphibious and can easily ford across waterways and land/extract via the coast. Its acceleration, top speed, and overall handling remains largely identical to that of the newer BMP-2. The sole difference is that the latter has a (very slightly) faster turn rate.

Drawbacks
In spite of its armament, the BMP-1 is still just an up-gunned APC and will be easily shredded by tanks and other heavy anti-tank weapons. It also lacks a dedicated anti-aircraft variant like its American counterpart, so it remains extremely vulnerable to being destroyed by attack helicopters.

Crew Capacity
The baseline IFV variant retains enough seats for a crew of three that consists of the driver, a gunner, and the commander. It can transport up to eight passengers at a time in the rear compartment. 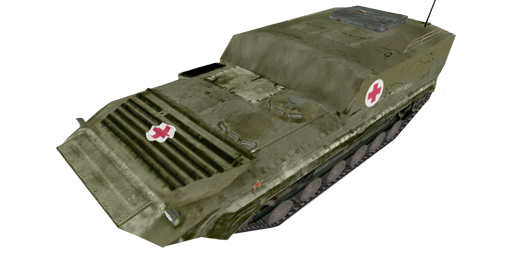 Medical support/transport variant that wounded infantry can heal themselves at.

The turret is removed on this model and the rear section of the hull is enlarged as well. This model is only able to transport up to four passengers at a time.

The BMP-1 has 200 points worth of armour plating.

The gunner position controls all three weapon systems affixed to the turret:

Primary gun. Can load either HE or AP-type shells.

It can achieve a fire rate of 60 rounds per minute and accuracy-wise, has a fixed dispersion of 0.002 rad regardless of range. There is no delay for swapping between munition types.

Anti-tank guided missile. Can lock-on via either infrared or SACLOS guidance.

Missiles are launched with an initial velocity of 30 m/s and only require 2.5 seconds to reach a top in-flight speed of 200 m/s. It takes 30 seconds before another missile can be launched. The warheads have a blast radius of 2.5 metres.

It should be noted that the BMP-1's AT-3 missiles are only controllable up to a maximum distance of 250 metres (immediately after launch). Beyond this distance, the AT-3 cannot be guided manually by the gunner.

It can attain a fire rate of up to 600 RPM and has a muzzle velocity of 1,000 m/s. Accuracy-wise, it always has a fixed dispersion of 0.0007 rad regardless of distance.