The BTR-90 is a wheeled Infantry Fighting Vehicle used exclusively by the Russian Armed Forces in ArmA 2.

The BTR-90 is a wheeled IFV that was first designed in early 1990s for the Russian military. It is designed to fulfil a wide range of roles ranging from providing fire support for dismounted troops to reconnaissance duties.

Armament
It is fitted with a 30 mm autocannon that is capable of firing both high-explosive and armour-piercing rounds at distances of up to 1,500 metres.

In addition to its primary cannon and 7.62 mm coaxial machine gun, the BTR-90 has an anti-tank guided missile launcher and a turret-mounted 30 mm automatic grenade launcher.

The standard loadout of the BTR-90 gives it 250 high-explosive (HE) explosive and 250 armour-piercing (AP) rounds for the main gun, forming a total of 500 shells together.

The coaxial PKT is loaded with a single linked belt of 2,000 rounds of 7.62 mm ammunition, while the ATGM launcher has up to 8 wire-guided Konkurs missiles and the turret-mounted AGS-17 feeds from a single belt of up to 400 grenades.

Features
The BTR-90 is the Russian counterpart of the American LAV-25 and like the LAV-25, is also amphibious-capable.

Compared to the LAV-25 however, the BTR-90 is far superior not only when it comes to firepower with its much wider array of weapons, but also in terms of transportation capacity as the BTR-90 can carry one additional passenger in its rear compartment.

Notable Traits
While the LAV-25 is practically powerless against Main Battle Tanks, the BTR-90 stands a fighting chance with its Konkurs anti-tank missiles, which can put a stop to even the toughest of MBTs like the M1A2 after two or three direct hits.

Drawbacks
Nonetheless, because the BTR-90 relies on wheels for locomotion and is lightly armoured (at least compared to the BMP-3), caution is still advised when tackling any vehicular or AT infantry threats since the BTR-90 is quite soft-skinned and won't last long in a prolonged fight against such threats.

Crew Capacity
The BTR-90 has a crew of three personnel consisting of the driver, a gunner, and the commander. It can transport up to seven passengers at a time who can enter the vehicle via the hatches located on either side of the hull. 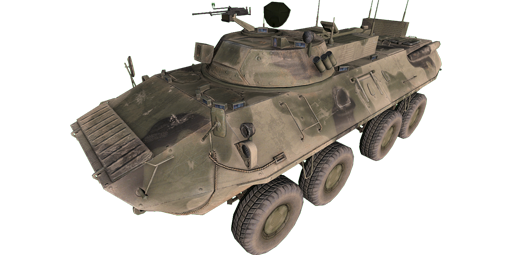 Stripped down version of the baseline BTR-90 with its turret armament removed and replaced with a single hatch fitted with a fixed (but rotatable) PKT machine gun. The PKT is loaded with a single belt box of 100 7.62 mm rounds and has a further four boxes left in reserve.

This variant cannot transport any passengers and is restricted to carrying its driver and commander only, who doubles as the vehicle's gunner.

(*) The BTR-90 (HQ) is completely non-functional in normal gameplay, and serves only as a deployable command vehicle in Capture The Island (CTI) scenarios created with the Warfare module.

Both variants of the BTR-90 have base armour values of 150.

Note that with the exception of the turret, component hitzones remain identical on the BTR-90 (HQ) variant.

Their hulls can resist up to 150 points of damage.

BTR-90 engines can survive 300 points of damage before failing. At least 20% of damage is shared with the vehicle's main "health" pool.

A damaged engine will prevent BTR-90s from being able to attain their top speed.

The fuel tanks on both variants can withstand 150 points of damage before rupturing. No amount of damage on the tanks are transferred back onto the BTR-90's "health" pool.

Incurred damage will cause the vehicle to gradually leak fuel over time.

The wheels on both BTR-90s can only take 60 points of damage. Destroying them will not affect the vehicle's "health" pool.

The regular IFV variant's turret incur up to 120 points of damage. 100% of incoming damage is always shared with the BTR-90's "health" pool.

Disabling the turret will prevent the gunner from freely adjusting the turret's rotation/elevation but does not stop its weapon systems from being utilised.

NOTE: For specifics on the 2A42's munitions, see its related section listed here.

The gunner position controls all weapon systems on the IFV variant. In the case of the HQ variant, the commander mans the externally-fitted PKT machine gun instead.

For optics, only the gunner and commander on the baseline IFV model have access to optics with magnified/enhanced vision modes. The gunner can toggle a day, night or green-hot/black-hot thermal vision modes (the commander utilises black-hot/white-hot instead):

The 2A42 has an effective firing range of 1,500 metres. It can switch between either HE or AP-type munitions but requires 10 seconds to finish reloading.

It can attain a variable fire rate depending on two modes:

Both modes have identical dispersion values of 0.0005 rad regardless of distance. Rounds are always fired in bursts of 5 no matter the selected mode (unless the 2A42 is out of ammunition).

There is a fixed delay of 1 second in-between launches. Missiles have an initial launch velocity of 80 m/s and can reach a maximum of 200 m/s in mid-flight. It takes up to 90 seconds to reload a fresh batch of missiles (assuming the BTR-90 has run out and has rearmed at a logistics unit).

Its seeker only supports manual SACLOS guidance and can be controlled up to a maximum distance of 4,000 metres. The warhead itself has a blast radius of only 1.2 metres.

Mounted adjacent to the primary autocannon or as a standalone turret ring weapon, the PKT medium machine gun is accurate at distances of up to 800 metres.