Representing the armed forces of the United Kingdom, the British Army is one of the most technologically advanced factions in the series alongside their counterparts from the United States.

They are initially deployed as part of the joint NATO task force during the invasion of Takistan as part of Operation Arrowhead. Following the invasion and removal of its dictator Colonel Aziz, their role shifted to peacekeeping duties and training the New Takistani Army (NTA).

The contingent in Takistan comprises of several companies' worth of troopers from the 2nd Battalion, Parachute Regiment (2 PARA) that are involved in the ongoing stabilisation efforts and counterinsurgency operations.

Though they were not present in Zargabad in the final stages of the campaign, British forces helped to secure the western and southern parts of the country while the main bulkhead of U.S. Army forces took down the Colonel himself.

Working alongside their Czech and German counterparts, the bulk of British Army ground troops and Special Air Service (SAS) teams were based in Karzeghistani territory prior to the main invasion. When the deadline expired on the eve of the invasion, Operation Arrowhead was given the green light from NATO command, and British forces from Task Force Rook and Task Force Queen crossed over the border into Takistani territory.

A combination of Royal Marines and a Fleet Air Arm (estimated squadron-sized) from the Royal Navy participated in the main assault against the southern cities of Karichar and Bandar-e-Ghazmi. British jets also sunk several Takistani naval gunboats and light cruisers alongside their American counterparts. A few SAS teams infiltrated and sabotaged key government facilities and military installations in both cities.

SAS teams later hunted down the last of the SCUD ballistic missile launchers that were primed towards neighbouring Karzeghistan and coalition forces.

With the threat of the pro-Aziz Takistani Army remnants finally neutralised and the country's situation mostly under control, the British Army begins the withdrawal of all its combat forces out of the country.

A small force of non-combat personnel remain behind to assist the on-going stabilisation operations but mostly stay in the secure and safer green zones.

However, their pullout alongside other NATO forces in the region also sets the country's gradual slide into civil warfare yet again. Almost a year after the invasion's end, the various tribes of the country, no longer unconditionally supportive of the West, compete against the NTA for control of the country.

Disgusted with the turn of events and the sacrifices of his men being all for naught, Brian Frost applies to be discharged from the British Army and joins up with the ION Services private military company.

Though not physically present during the events of The East Wind, conventional British forces were a component of the U.S.-led Task Force Aegis. They were initially assigned to peacekeeping duties alongside a contingent of troops from the U.S. Army's 7th Infantry Division (7th ID) on the Republic of Altis and Stratis.

However, an attempt to extend their deployment by the incumbent Prime Minister, Nicholas Ramsden, was rejected by an overwhelming majority vote in Parliament. With no hope of its renewal, the mandate expired on its own and British peacekeepers would be scheduled to withdraw from the island nation.

Facing civil unrest at home, a battered and stagnant economy, and the nation still in the grips of a two decade-long depression, the British military can barely afford to maintain operations on its home soil; let alone on foreign shores.

They are mentioned on several news broadcasts as having been pulled out months prior to the breakout of hostilities between the Altis Armed Forces and the remaining American peacekeepers on Stratis.

They were part of the 25,000 man force which consisted of troops from the United States, the United Kingdom, and Livonia. Alongside their allies, the exercises involved British troops alternating between repelling an invasion and roleplaying as a Russian military invasion force (with the Livonians also playing the role of the defenders/aggressors).

For ballistic protection, British Army troopers mostly wear the Osprey Mk2 body armour vest as well as Mk7 combat helmets as headwear. Like their American counterparts, most troopers are also issued a set of night vision goggles for use in low-visibility conditions.

Personal gear is usually camouflaged with the DPM/DDPM patterns for use in either woodland or desert environments (respectively), though the contingent in Takistan primarily utilises the newer Multi-Terrain Pattern (MTP) universal camouflage pattern. 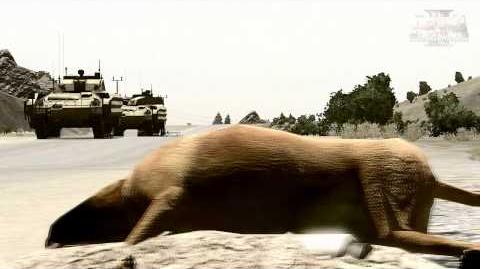