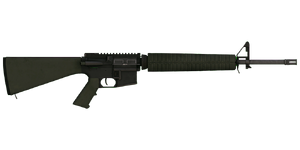 The C7A1 is a 5.56 mm assault rifle that remains unused by any faction in ArmA 3. It was added with the release of the Global Mobilization - Cold War Germany Creator DLC.

The C7A1 is a selective-fire assault rifle with a direct impingement operation that is chambered to fire the 5.56×45 mm NATO round.

It feeds from 30-round STANAG magazines but can also load older 20-round box magazines utilised by the American-made M16A1. It can attain a fire rate of up to ~ 652 rounds per minute (800 on full auto) and retains a muzzle velocity of 960 m/s. The C7A1 supports being fitted with optical sights and can mount sound suppressors onto its muzzle.

At first glance, the C7A1 would appear to be no different to the M16A1 or the newer M16A2. It has virtually identical recoil, can toggle between semi-automatic or fully automatic firing modes, and is also quite accurate at ranges of up to 500 metres but possesses mediocre stopping power.

However, the primary upside to the C7A1 doesn't stem from its performance. Rather, this comes from its ability to mount optical sights thanks to using a Weaver rail. Since the C7A1 doesn't utilise a carryhandle like its American counterparts, its accessory rail allows the user to freely attach whatever optical sight or enhanced vision scope as the mission requires.

A consequence of lacking a carryhandle is that the C7A1 no longer has a rear sight and relies exclusively on its front sight. While this can be somewhat disadvantageous if the user doesn't have access to any magnified scopes, the ability to mount optical accessories more than compensates for the loss.

NOTE: The C7A1 is capable of loading the same magazines utilised by non-Global Mobilization 5.56 mm-chambered weapons. To minimise clutter, they are deliberately excluded from this section.

The C7A1 is able to load up to eight types of magazines which are interchangeable with other 5.56 mm-chambered weapons (aside from the G36). Its 30-rounder STANAGs weigh a "mass" of 12.24 while the reduced capacity 20-round box magazines weigh a total of 7.77 "mass":

Can be shared with the M16A2. Does not contain any visible tracer rounds.

Alternate 20-round box magazine utilised specifically by the M16A1.

Remains identical with the exception of capacity and weight.