The CH-49 Mohawk is a medium-lift transport helicopter used by the AAF in ArmA 3.

A civilian variant also exists, and is known as the EH302 in IDAP service. It was added with the release of the Laws of War DLC.

The Mohawk is a conventionally designed, four-bladed, rotary-wing helicopter that is powered by three engines.

Its intended primary use is for transporting troops into battle, although it can also be used as a luxury V.I.P transport, for slingloading military cargo, or as a civilian freight transporter as well.

Features
It has an aft ramp which allows for the two rear passengers to shoot out of the helicopter while it is open, and can be controlled either by the pilot or the two passengers.

This design also makes it so that the Mohawk that it has a higher positioned tail rotor, making it less prone to having its rotors damaged during landings.

Mobility
The Mohawk is (especially for its size) the fastest out of the medium/heavy-lift helicopters currently available in Arma 3; due in large part to its three-engine design which enables to it reach a top speed of up to 330 km/h.

Drawbacks
Like most helicopters, the Mohawk is no different in that all it takes is one near-miss from a surface-to-air missile launcher to knock it out of the sky.

The Mohawk also has somewhat ungainly handling as a consequence of its large airframe. When it comes to manoeuvrability, it has trouble maintain speed on turns (in contrast to NATO's Ghost Hawk or CSAT's Mi-290) and also has a higher risk of incurring heavy damage or being outright destroyed from hard landings.

The other downside is that it is completely unarmed, relying solely on its RWR and countermeasures to evade anti-air threats. Last but not least, it is 20% easier to detect by all kinds of electronic sensors which makes it an easy target to guided AA systems.

Crew Capacity
The Mohawk has a seating capacity of eighteen personnel (including the crew). This consists of both the pilot and co-pilot, and up to sixteen passengers. 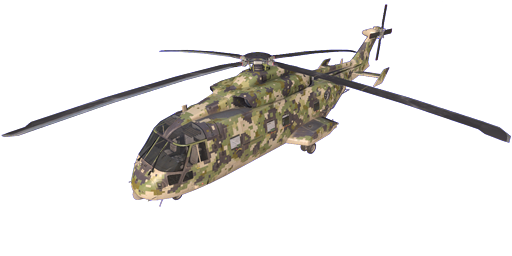 Used exclusively by the AAF. 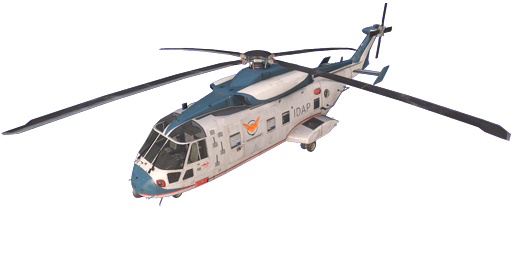 It is functionally identical in all aspects to the baseline Mohawk aside from using a custom paint scheme with IDAP livery, and lacking countermeasure flares.

(*) These camouflage schemes cannot be applied onto Mohawks/EH302s outside of the Virtual Garage.

Both the baseline model and civilian derivative have base armour values of 40.

Hull damage is calculated based on the integrity of other components on the Mohawk. Until all other parts of the helicopter have been critically damaged, the hull itself can never be "destroyed".

Each of the Mohawk's engines can survive 28 points of damage (total of two). They take 300% increased damage from high-explosive (HE) type weapons.

If damaged: Reduced power output and makes it difficult to gain both speed and altitude.
If destroyed: Can potentially blow up the Mohawk instantly if overall status of helicopter is at critical.

The Mohawk's fuel tank can only take a mere 28 points of damage before rupturing. It takes 200% increased damage from HE-type weapons.

A damaged fuel tank will not cause a total loss unless damage levels are already at critical.

Consists of the pilot/gunner flight instruments, Multi-Functional Displays (MFD) and Helmet Mounted Displays (HMD). They can incur 52 points of damage before failure.

If damaged: Occasional flickering of MFDs and pilot HMD. Other instruments unaffected.
If destroyed: MFDs and HMD disabled. Instruments may not display proper readings.

The main rotor can resist up to 104 points of damage before destruction. It takes 250% increased damage from HE-type weapons.

A disabled main rotor makes it increasingly difficult to maintain the Mohawk's lift. Unless the tail rotor has also been disabled however, the Mohawk can still be (reasonably) controlled at low airspeeds.

The tail rotor can resist up to 52 points of damage before failure. It will take 600% increased damage from HE-type weapons.

A disabled tail rotor will drastically increase torque from the main rotor. At low airspeeds, the Mohawk will become extremely difficult to control due to constant yaw shifting to one side.

Designed exclusively for transporting troops and cargo, the Mohawk has only one type of sensor available:

The Mohawk does not utilise an active radar as it does not have any armament.

The Mohawk does not have the ability to detect targets visually or through IRST.

The Mohawk does not have the ability to lock onto laser marks or infrared strobes.

The Mohawk has a maximum lifting capacity of 5000 kg, and is able to slingload and transport a variety of small- to medium-sized ground vehicles.

The Mohawk is the AAF's only heavy airlift vehicle and its lifting capabilities do not match up to the abilities of the Huron and the Mi-290. For example, the Mohawk is unable to lift any variant of the AAF's MRAP. Even though the Strider is amphibious unlike the MRAPs of the other factions, the AAF is nonetheless at a significant disadvantage in heavy lifting options, as the Mohawk is also unable to lift Speedboats and transport trucks.

Fortunately however, it remains capable of transporting the AWC Nyx family of tankettes, which greatly assists the latter when it comes to addressing their mobility and fuel economy issues.