The CH-67 Huron is a heavy transport helicopter used exclusively by NATO forces in ArmA 3. It was added with the release of the Helicopters DLC.

This is a premium asset that requires ownership of the Helicopters DLC.

The Huron is a twin-engine, tandem rotor, semi-stealth heavy-lift helicopter.

The tandem rotor layout eliminates the need for an anti-torque vertical rotor, allowing all power to be used for lift and thrust. This means it less sensitive to changes in its centre of gravity, making the Huron suitable for slingloading heavy cargo loads.

By default, each of the Huron's twin miniguns are fed with a single 2000-round linked belt (for a combined total of 4,000 rounds). The Huron does not support dynamic loadouts as the side windows are unable to mount any other types of weapons, nor does it have the ability to fit any stub wings onto the fuselage.

This armament means that the Huron retains one major advantage over its CSAT counterpart: since it is always armed by default (assuming that one is flying the baseline variant), it is less risky to drop or pick up troops/cargo in a hot landing zone. The Huron's gunners can suppress enemy forces during the landing process, whereas the Mi-290 cannot do the same without an escort providing cover for it.

Mobility
Compared to its Mi-290, the Huron is slightly faster and has overall better stability in low-level flight. As a consequence however, it is less manoeuvrable and lacks the agility of the Mi-290.

Drawbacks
Its main downside stems from its lack of flexibility. Unlike the Mi-290, it is limited in the types of the cargo that it can transport, whereas the Mi-290 can carry a diverse array of cargo loads and slingload slightly heavier vehicles. Furthermore, the Huron is not stealthed against electronic sensors in spite of its appearance, and can still be easily detected on active radars and infrared sensors.

It can be spotted at distances of 20% more than the opposing sensor's usual maximum ranges - an issue incidentally, that its CSAT counterpart also shares. Fortunately, the Huron will at least stand a higher chance of survival should the situation arise thanks to its armament and its (marginally) tougher airframe.

Crew Capacity
Both variants always have at least four seats for the crew that consists of the pilot, co-pilot, and two gunners/crew chiefs who either control the mounted miniguns or can fire their own weapons (in the case of the unarmed variant for the latter). 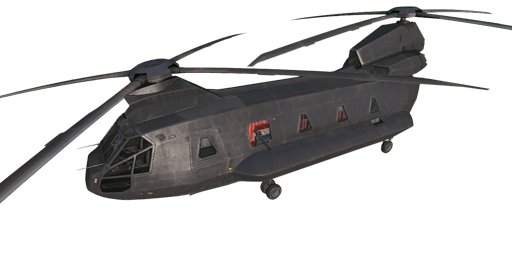 Has two gunners who manually operate the two 6.5 mm miniguns through an open window on each side of the fuselage. It can transport up to sixteen passengers. 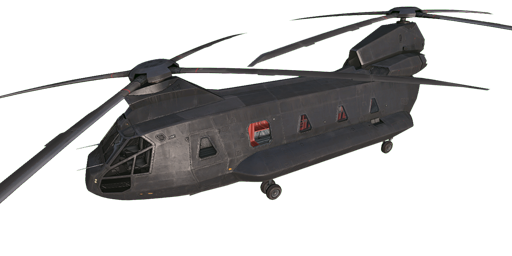 The two 6.5 mm miniguns and gunner positions are removed on this version, enabling up to two more passengers to be transported instead.

This makes for a total of eighteen passengers that can be carried at once on this variant. Otherwise, it is functionally identical to the baseline Huron.

Both variants of the Huron have base armour values of 40.

Hull damage is calculated based on the integrity of other components on the Huron. Until all other parts of the helicopter have been critically damaged, the hull itself can never be "destroyed".

Each of the Huron's engines can survive 28 points of damage (there are two in total). They take 300% increased damage from high-explosive (HE) type munitions.

If damaged: Reduced power output and makes it difficult to gain both speed and altitude.
If destroyed: Can potentially blow up the Huron instantly if overall status of helicopter is at critical.

The Huron's fuel tank can only take 28 points of damage before rupturing. It takes 200% increased damage from HE-type munitions.

Destroying the Huron's fuel tank will not result in a total loss unless the helicopter's damage levels are at critical.

Consists of the pilot/gunner flight instruments, Multi-Functional Displays (MFD) and Helmet Mounted Display (HMD). They can incur 52 points of damage before failing, and also take 150% increased damage from HE-type munitions.

If damaged: Occasional flickering of MFDs and HMD. Other instruments remain unaffected.
If destroyed: MFDs and HMD disabled. Instruments may not display proper readings.

The tandem rotors can each incur up to 104 points of damage before failing. They receive a 250% increased damage penalty from HE-type munitions.

Disabling either of the rotors will significantly raise the difficulty of maintaining the Huron's stability, and it may not be possible to control the helicopter at high airspeeds. Diving and eventually crashing is likely to occur at extreme altitudes unless the pilot was already close to the ground at the time of the rotor's destruction.

Each of the rotor's stabilisers are only able to survive 32 points of damage before breaking. They take no additional damage from HE-type munitions and none of it is shared with the Huron's main "health" pool.

Designed exclusively for transporting cargo, the Huron has only one type of sensor available:

The Huron does not use an active radar as it does not have any weapon systems that would require one.

The Huron does not have the ability to detect targets visually or through IRST.

The Huron does not have the ability to lock onto laser marks or infrared strobes.

Both of the Huron's gunners man the side window-mounted Minigun 6.5 mm turrets on the armed variant.

For the left and right gunners on the armed variant, they have a maximum horizontal rotation limit of 140 degrees and vertical limits of just 2 degrees (elevation) and 25 degrees (depression):

They can attain fire rates of up to ~ 1,818 rounds per minute and have muzzle velocities of 825 m/s. Accuracy-wise, they have a spread of 0.0115 rad at ranges of up to 1,000 metres. Assuming that both of their belts have been depleted, it takes a total of 20 seconds to fully rearm both guns at a logistical vehicle/crate.

The Huron has a maximum weight capacity of 12000 kg and is able to slingload a variety of medium/heavy ground vehicles and equipment.

The Huron's lifting abilities overlap with that of the Blackfish's vehicle transport variant with regards to most ground vehicles, ranging from the Prowler LSV to Hunter MRAPs. However, the Huron is the only rotary-wing aircraft that is capable of airlifting armed variants of the Hunter (HMG/GMG), its own supply containers, SDVs and armed boats.

Most notably, it is also the only NATO helicopter that can slingload the (transporter only) HEMTT truck. Other NATO helicopters like the Ghost Hawk or the Hummingbird can also transport supply boxes and items in cargo nets, but cannot lift the same vehicles that only the Huron is capable of.

It should be noted that both variants of the Huron (armed and unarmed) retain identical maximum weight capacities. There is absolutely no difference in capability between the two variants.

NOTE: Only one container may be slung at any given moment. Containers can be destroyed if they are struck by anti-structure munitions or are caught in the blast zone of large explosives.

The Huron does not possess the ability to resupply vehicles and other aircraft on its own. Rather, it has the ability to externally slingload metal supply containers which compensate for the Huron's lack of an innate logistics capability: 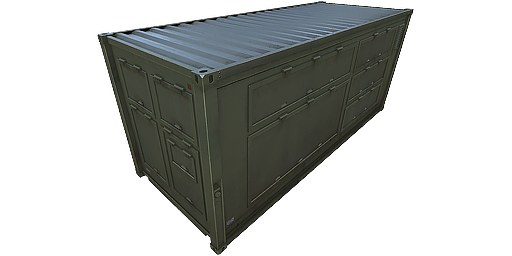 Can rearm vehicles and grounded aircraft that are parked next to it. It should be noted that out of all the Huron's containers, this is the sole variant that is unable to store handheld equipment and/or ammunition.

This container has a gross weight of 8000 kg. 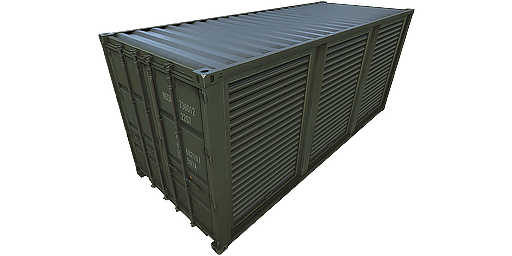 Equipment container. Aside from being able to store up to 2000 "mass" of infantry equipment and ammunition, it does not possess any logistical capabilities.

This container has a gross weight of 7500 kg. 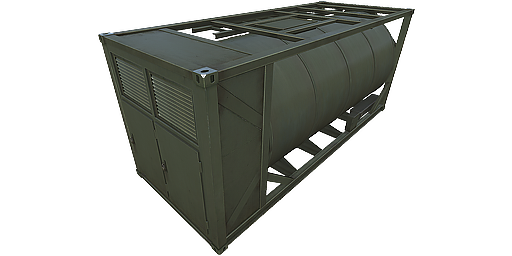 Can refuel nearby vehicles and grounded aircraft.

This container has a gross weight of 8500 kg. 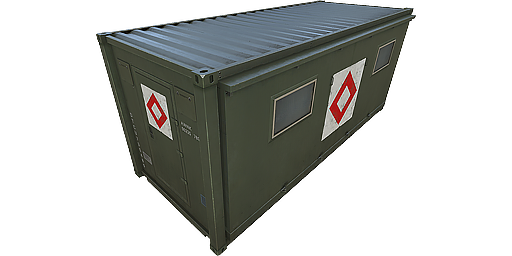 Injured human soldiers and civilians can approach this container to "heal" themselves by using the Treat command.

This container has a gross weight of 7000 kg. 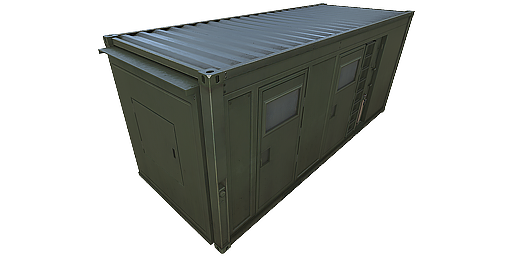 Can repair damaged vehicles and grounded aircraft that are positioned around it.

This container has a gross weight of 7000 kg.

Interior of the Huron's cockpit.