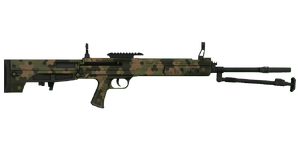 The CMR-76 is a 6.5 mm bullpup designated marksman rifle used exclusively by Pacific CSAT forces in ArmA 3. It was added with the release of the Apex DLC.

The CMR-76 is a gas operated designated marksman rifle with a short-stroke piston that is chambered to fire cased 6.5×39 mm ammunition.

It loads from 20-round magazines, and can attain a fire rate of up to 652 rounds per minute with a muzzle velocity of 980 m/s. It supports top rail accessories and muzzle-fitted suppressors. It cannot be fitted with any flashlights or laser pointers, and eschews the need to mount underbarrel attachments as it uses an integral bipod.

The CMR-76 provides the operator with the ability to provide great sniper fire cover. It can be effectively used to suppress enemies with precision accuracy at distances of up to ~ 790 metres. It weighs the same as its NATO counterpart but is more accurate at medium-long ranges and has less recoil.

The main downside to the CMR-76 stem from its relatively small magazine capacity, which contains only twenty rounds versus the MXM's thirty or even a hundred if loaded with the MX SW's stacked magazines.

Furthermore, unlike most marksman rifles it is limited to a semi-automatic fire mode only. When it comes to attachment options, the CMR-76 only allows for sound suppressors and optical sights to be fitted. Due to the lack of a side rail, it isn't possible to mount a laser pointer or flashlight onto the weapon.

The CMR-76 only supports one type of magazine. It weighs a total of 7 "mass" units.

Box magazine loaded with cased 6.5 mm ammunition. Does not contain any visible tracers.