The CTRG Plate Carrier Rig Mk.2 is a ballistic-resistant vest worn by CTRG operatives in ArmA 3.

Favoured by some of CTRG's operatives, the Plate Carrier Rig Mk.2 offers enhanced protection for its wearer at the cost of a higher stamina burden. It weighs a "mass" of 100 and provides space for up to 140 units worth of ammunition/gear.

Just like NATO's Carrier Rig vest, the Plate Carrier Rig Mk.2 is rated higher than the Mk.1 and has Level IV protection standards. Surface coverage of the wearer's torso remains the same, but each part's base armour values have been increased to 20 (with damage reduction modifiers of 80%).

The wearer can survive one point blank hit from a 7.62 mm bullet along with a second, smaller calibre round. In all other aspects however, the Mk.2 remains largely unchanged from normal Carrier Rigs. 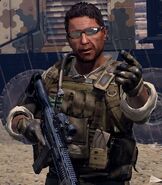