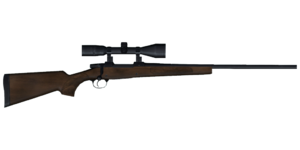 The CZ 550 is a 9.3 mm sniper rifle used in limited numbers by both ChDKZ insurgents and NAPA guerillas along with Chernarussian civilian hunters in ArmA 2.

It loads from 5-round box magazines, and has a maximum fire rate of 30 rounds per minute with a muzzle velocity of 870 m/s. The CZ 550 is only available in a single model that is fitted with a sniper scope that has a magnification strength range of 2.8x-5x. It can be zeroed up to a maximum distance of 800 metres.

Designed exclusively for hunting wild animals and recreational shooting, the CZ 550 is made to be a rugged firearm. It performs and handles remarkably similar to the M24/M40A3 sniper rifles utilised by the U.S. Marines.

Despite being intended for civilian-use only, one hit from its 9.3 mm round will often be more than enough to seriously wound or kill an infantry target at close distances. And because it can also be zeroed, the CZ 550 works well as both a pseudo-marksman rifle and sniper weapon at the same time; being effective at ranges of between 300 and up to 600 metres.

Obviously, this doesn't mean that the CZ 550 can replace dedicated sniper rifles like the SVD, which have better optics and are optimised specifically for engaging military targets. But at the very least, it does allow the CZ 550 to assume that role should proper sniper weapons be unavailable to use.

The CZ 550 is limited to loading one type of magazine only. It requires one free inventory slot to carry:

Standard 5-round magazine. Does not contain any visible tracers.

Retrieved from "https://armedassault.fandom.com/wiki/CZ_550?oldid=62574"
Community content is available under CC-BY-SA unless otherwise noted.