The CZ 75 is a 9 mm handgun featured in both ArmA: Cold War Assault and ArmA 2. 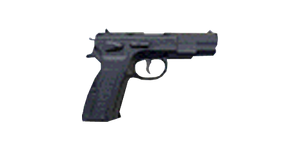 The CZ-75 is used by both the EFA and their Nogovan Partisan predecessors in ArmA: Cold War Assault.

The CZ-75 is a short-recoil operated, semi-automatic pistol with a fixed barrel that is chambered to fire the 9×19 mm round.

It loads specifically from 14-round magazines, and can attain a fire rate of up to 600 rounds per minute with a muzzle velocity of 360 m/s.

For all intents and purposes, the CZ-75 is essentially a better version of the Soviet Tokarev TT-33 handgun. Both are almost the same statistics-wise, but the CZ-75 has marginally higher accuracy (at the cost of lower damage output).

It also possesses a significantly larger magazine of 14 rounds versus the TT-33's 8, which makes the CZ-75 more effective in close quarters.

The CZ-75 can only load one type of magazine. It occupies one inventory slot:

14-round magazine loaded with 9 mm ammunition. 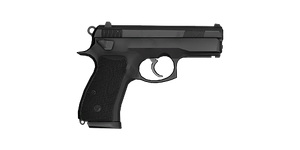 The CZ 75 D COMPACT is used exclusively by Czech military forces in ArmA 2. It was added with the release of the Army of the Czech Republic DLC.

The CZ 75 D COMPACT returns once more in ArmA 2 where it now serves as the standard-issue sidearm of Czech troops.

It now loads from 10-round magazines and can attain a fire rate of up to 600 rounds per minute, with a muzzle velocity of 400 m/s. The CZ 75 D COMPACT cannot be fitted with accessories or muzzle attachments.

The CZ 75 D COMPACT was the standard-issue service pistol of the Czech military during the events of Operation Arrowhead.

Performance-wise, it is quite similar to the M9 handgun wielded by American forces - with the main differences being the COMPACT's slightly reduced accuracy over longer distances and possessing a smaller magazine capacity of 10 rounds versus the M9's 15. 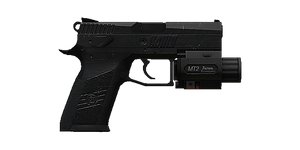 The CZ 75 P-07 DUTY is a modified variant of the baseline CZ 75 D COMPACT handgun.

As with the COMPACT, it is completely identical to the M9 both performance and statistics-wise, the only difference being that the DUTY has an externally-mounted flashlight fitted beneath the barrel. However, it cannot be suppressed for covert operations like the M9. 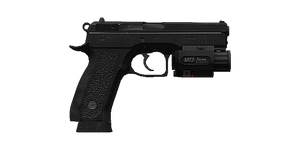 The CZ 75 SP-01 PHANTOM is a heavily modified variant of the baseline CZ 75 D COMPACT handgun.

Unlike the COMPACT, the PHANTOM has the best accuracy out of the three ArmA 2 CZ 75 pistols. It can also be suppressed as well as having the ability to mount either a flashlight or laser pointer beneath the barrel.

As is the case with the DUTY, it can load the same magazines used by all other 9 mm handguns. However, it is primarily designed to load its own in the form of 18-round extended capacity box magazines.

It should be noted that suppressor-fitted CZ 75 PHANTOM (SD) is only able to load subsonic 9 mm magazines designed for the PHANTOM itself, or those used by the M9 SD.

All magazines only take up one inventory slot apiece:

Standard 18-round pistol magazine, intended for use with the SP-01 PHANTOM.

Pistol magazine intended for use with suppressed SP-01 PHANTOM pistols. It is loaded with specialised subsonic ammunition.

Rounds fired from this magazine have a lower muzzle velocity of 320 m/s. It is otherwise identical to regular PHANTOM magazines.

This magazine can be loaded by suppressed PHANTOMs.

10-round pistol magazine exclusively used by the CZ 75 D COMPACT. Aside from its capacity, it has identical statistics to regular PHANTOM magazines.

It should be noted that aside from this magazine, the COMPACT cannot load any other types of magazines.

17-round magazine used by G17 pistols.

Identical in all aspects aside from its capacity.

This magazine can be loaded by suppressed PHANTOMs.