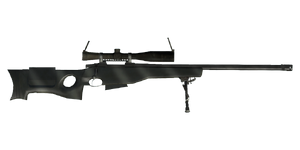 The CZ 750 S1 M1 is a 7.62 mm sniper rifle used exclusively by Czech military forces in ArmA 2. It was added with the release of the Army of the Czech Republic DLC.

It primarily loads from 10-round box magazines designed specifically for the CZ 750 S1 M1, but can also feed from the 5-rounders used by the American M24 and M40A3. It has a maximum fire rate of just 30 rounds per minute, with a muzzle velocity of 900 m/s. The CZ 750 S1 M1 is always fitted with a riflescope that has a magnification strength of 10x, along with an integrated (but non-functional) bipod. It cannot be suppressed or fitted with laser pointers/flashlights.

The CZ 750 S1 M1 is essentially the Czech counterpart to the M40A3 sniper rifle used by the U.S. Marine Corps. The only difference with the CZ 750 is that it has slightly reduced accuracy. In all other aspects it is completely identical, with the scope even having the same reticle and amount of magnification.

As a result, it also shares the same drawbacks of the M24/M40A3, namely being a bolt-action weapon which causes it to have a very slow rate of fire, and the inability to adjust the weapon's zeroing beyond 800 metres.

Its only advantage over the former is its larger magazine that has 10 rounds versus the M24's/M40A3's 5-round box, though this doesn't compensate for its inherited drawbacks.

The CZ 750 S1 M1 support two types of magazines. They each require only one inventory slot to carry:

Standard 10-round box magazine. Does not contain any visible tracers.

5-round box magazine shared with the M24.

Aside from its reduced capacity, it is completely identical performance-wise to standard 10-rounders.