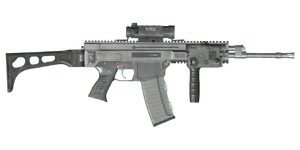 The CZ 805 BREN A1 is a 5.56 mm assault rifle used exclusively by Czech military forces in ArmA 2. It was added with the release of the Army of the Czech Republic DLC.

The CZ 805 BREN A1 is a selective-fire, gas operated assault rifle with a rotating bolt that is chambered to fire the 5.56×45 mm NATO round.

It is primarily designed to feed from the same 30-round plastic magazines used by the German-made G36 family of rifles, though it can also utilise regular STANAG magazines as well as the 100-round drums used by the XM8's LSW variant.

The A1 can attain a fire rate of up to 600 rounds per minute, and has a muzzle velocity of 920 m/s. The A1 is always fitted with the ZD-Dot red dot sight and has a laser pointer fitted to its side rail. The A1 cannot be suppressed with muzzle attachments.

Exclusively wielded by the Czech Army's conventional ground forces and 601st SFG operatives, it was introduced to replace the older Sa-58 and is designed with modularity in mind. Compared to its American and British-made counterparts, the A1 has slightly better (but almost unnoticeable) accuracy and an effective range of between 370-500 metres.

While the A1 doesn't particularly excel in any area, it doesn't have any glaring drawbacks that would make it a terrible choice of weapon either. Overall, it is a decent 5.56 mm assault rifle that is both compact and easy-to-use. Combined with its many available sub-variants (which includes a 7.62 mm-chambered model), this makes it a flexible weapon to use for any type of mission. 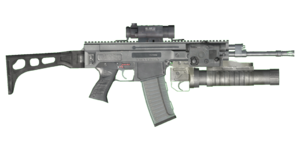 The CZ 805 A1 G1 is simply a modified variant of the baseline BREN that has been fitted with an underbarrel grenade launcher.

The underbarrel G1 is able to load and fire the same M203-type 40 mm grenade rounds, ranging from high-explosive (HE) rounds to less-than-lethal flare shells and non-lethal smoke grenades.

The G1 uses a red dot quadrant sight for aiming, and is accurate at distances of up to 350 metres. In all other aspects, the CZ 805 A1 G1 is completely identical to its parent weapon in every way. 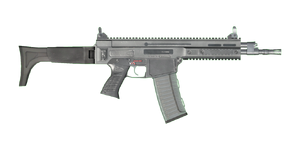 The CZ 805 BREN A2 is a compact carbine configuration of the baseline A1 rifle. Unlike its parent rifle, the A2 has a reduced effective range of just 400 metres since it uses a shorter barrel.

Like the M4A1 wielded by their U.S. Marine counterparts, its dispersion is slightly increased in comparison to the baseline rifle. This makes the A2 only useful for special operations units fighting in close quarters or for vehicle crews to carry.

It lacks a laser pointer, but does have access to a flashlight that is fitted to the side rail on the CZ 805 BREN A2 (SD) sub-variant. It usually comes standard with just ironsights but the ZD-Dot red dot sight can be attached onto the suppressed model.

While the A2 variant is unique for being the only model of the BREN family that can be suppressed, it should be noted that this model is only able to load G36-type/STANAG magazines that have subsonic ammunition, and are unable to load regular non-subsonic 5.56 mm magazines. 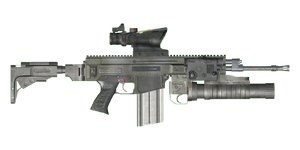 The CZ 805 B1 G1 is a heavily modified A1 assault rifle that has been converted into a battle rifle. Unlike its parent weapon, the B1 is chambered to fire 7.62×51 mm NATO ammunition instead of 5.56 mm NATO. Like the A1 G1 variant, it has an underbarrel grenade launcher that can launch 40 mm grenades.

The B1 can load all 7.62 mm NATO box magazines ranging from those used by the U.S. Army's Mk17 to the Takistani FAL. For optics, the B1 is always fitted with an ACOG riflescope and a laser pointer.

Though the B1 itself cannot attach muzzle suppressors like the A2 carbine, it retains the ability to load the same subsonic magazines shared by suppressed configurations of the Mk17 battle rifle.

Performance-wise, the B1 has the best accuracy out of all the rifles in the BREN family and has minimal dispersion at long distances. While its effective range is still identical to that of the A1 (600 metres), its 7.62 mm round hits harder and will usually guarantee a kill on an unarmoured target with 1-2 rounds to the chest.

For grenade rounds usable with the G1, refer to its dedicated article here.

5.56 mm-chambered BREN rifles are able to feed from five types of magazines. Only the B1 battle rifle is restricted to four types of 7.62 mm magazines. Regardless of variant however, all magazines occupy one inventory slot no matter the type:

Standard 30-round plastic magazine. Also shared with the G36 family.

Suppressed variants of the BREN can load this magazine.

100-round Beta-C drum specifically intended for use with the XM8 Automatic Rifle variant.

Aside from its capacity it is completely identical to regular 30-round plastic magazines.

Alternate 30-round magazine used by M16A4 rifles and M4A1 carbines.

It is largely identical to the XM8's standard plastic magazines, but rounds fired from this magazine specifically have a slightly higher muzzle velocity of 930 m/s instead.

Suppressed variants of the BREN can load this magazine.

20-round box magazine exclusively used by the B1 battle rifle (and interchangeable with the American Mk17). Does not contain any visible tracers.

Rounds fired from this magazine have a muzzle velocity of 900 m/s.

Loaded with subsonic 7.62 mm ammunition. The rounds fired from this magazine specifically have lower velocities of 320 m/s instead.

20-round box designed for use with FN FAL battle rifle.

20-round box designed for use with DMR marksman rifle.