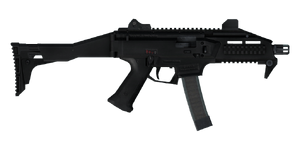 The CZ Scorpion Evo 3 A1 is a 9 mm submachine gun used exclusively by Czech military forces in ArmA 2. It was added with the release of the Army of the Czech Republic DLC.

The Scorpion Evo 3 is a blowback-operated, selective-fire submachine gun that is chambered for the the 9×19 mm round.

On top of its regular 30-round plastic magazines, it is able to utilise those used by SP-01 PHANTOM/COMPACT and American M9 handguns as well. It can attain a fire rate of up to 856 rounds per minute and has a muzzle velocity of 400 m/s. The Scorpion is usually fitted with the MRAD red dot sight, and also supports being mounted with laser sights and flashlights on its side rail. It can have suppressors attached to its muzzle.

Primarily wielded by Czech helicopter pilots, ground vehicle crewmen, and select special operations units, the Scorpion is the direct counterpart to the American MP5A5 SMG used by the U.S. Marine Corps and is identical in almost every way to the latter.

The main differences with the Scorpion is that it supports being loaded with 9 mm magazines used by almost every other 9 mm SMG and handgun; aside from those used by Russian-made 9 mm firearms as they utilise a different calibre. Because it has integrated accessory rails, the Scorpion can also be fitted with optical sights that make it far more easier to aim with than the MP5A5.

But as a consequence, the Scorpion shares the same downsides as the MP5A5 as well - namely the lack of range, poor stopping power, and the inventory space inefficiency of its magazines when compared to the Russian PP-19.

It should also be noted that while the non-suppressed Scorpion is able to load subsonic magazines, the suppressed version of the Scorpion (the CZ SCORPION EVO 3 (SD) sub-variant) is not able to do so and cannot utilise the same magazines as its non-suppressed counterpart.

Standard 30-round plastic magazine. Does not contain any visible tracers.

Intended specifically for use with the suppressed Scorpion. Rounds fired from this magazine specifically have a lower muzzle velocity of 320 m/s.

18-round pistol magazine intended for use with the SP-01 variant of the CZ 75 pistol. Remains identical in all other aspects.

Pistol magazine intended for use with suppressed SP-01 PHANTOM pistols. It is loaded with specialised subsonic ammunition.

Rounds fired from this magazine have a lower muzzle velocity of 320 m/s. It is otherwise identical to regular PHANTOM magazines.

This magazine can be loaded by the suppressed Scorpion.

10-round pistol magazine used by the CZ 75 D COMPACT. Aside from its capacity, it has identical statistics to regular PHANTOM magazines.

This magazine can be loaded by the suppressed Scorpion.