Caught in boat explosion and drowned

Conway was the main protagonist of ArmA 3's Prologue campaign.

A soldier from the U.S. Army's 7th Infantry Division, Conway was one of the many peacekeepers of Task Force Aegis that were stationed on the island nation of the Republic of Altis and Stratis.

He is subordinate to Staff Sergeant Thomas Adams, and the two are largely responsible for training Altis Armed Forces recruits, advising their units in the field, and mediating peace talks between AAF and FIA.

Alongside Adams, Conway handles the training of newly-recruited AAF troopers, teaching them the basics of fire drills and counterinsurgency warfare and tactics. They briefly used a VR training simulator while waiting on another fresh batch of AAF recruits, who arrived shortly after they began the testing the device.

Before they can continue with the training exercises however, the duo receive a radio message from another AAF squad, who immediately ask for help regarding an "incident" involving supposed FIA collaborators at a small residence west of Syrta.

Hopping into their MRAP, Conway drives off with Adams to link up with the AAF squad. Instead of guerillas however, they find the troopers standing by the corpses of several (clearly executed) civilians and a single man being held a gunpoint.

Disgusted, Conway immediately demands the troopers to explain themselves, but Adams urges restraint and orders him to search the houses for signs of possible collusion with the guerillas.

Conway does discover a small stash of weapons, but remains appalled at the disproportionate level of force that the troopers exerted on the civilians.

Days later, Conway along with Adams is reassigned by the task force's commander, Colonel Andrew MacKinnon, to provide security for an FIA-AAF meeting at the Ministry of Defense in the old capital of Kavala. Before the talks can begin however, he is dispatched to investigate an AAF convoy that had failed to check in.

Upon arrival near the convoy's last known position, his team comes under fire from FIA guerillas. They manage to repel the attackers, but reach the convoy to find all but one of the troopers dead. Conway stabilises the mortally injured trooper with what limited medical supplies at hand, while awaiting transport and further reinforcements.

Afterwards, MacKinnon urgently requests that they head back to Kavala after reports come in of an FIA-initiated uprising in the city. Arriving back at the city, the duo hop into an MRAP and drive through the city to find things having gone from bad to worse.

They arrive at the northern part of the city and are greeted with the unpleasant sight of several captured guerillas awaiting execution via firing squad. Outraged by the scene, Conway immediately orders the AAF troopers to stand down but is ignored after their leader, Georgious Akhanteros, countermands and rebukes the Sergeant's orders.

Before they could argue any further, Conway is commanded to stand down under direct orders from MacKinnon himself. Astounded at MacKinnon's inability to put a halt to the executions as well as Akhanteros' casual disregard for human rights, Conway can do nothing but walk away with Adams as the guerillas are executed one by one.

A year later after TF Aegis' mandate is restricted and are forced to remain on the smaller island of Stratis only, Conway is one of the few survivors of TF Aegis that managed to survive against the AAF's retaliatory attack.

He is soon appointed by CTRG Captain Scott Miller to become the leader of Alpha squad (including Corporal Ben Kerry), and leads his new squad through several successful missions against the AAF, relieving Sergeant Lacey's Bravo squad after they're pinned down in Girna as well as leading the assault against Air Station Mike-26.

Unfortunately for Conway and the rest of TF Aegis, their guerilla-style raids were futile in the end even with their sustained victories against the AAF.

A sudden CSAT counterattack almost completely wipes out the survivors following an all-out attack by the remnants of TF Aegis against the port town of Agia Marina. Conway rallies what's left of the task force, and together they retreat from the island on boats provided by Capt. Miller's team.

However, not long after they just barely manage to escape to the sea, their boats are intercepted and strafed by AAF jets which promptly open fire and capsize both vessels. Conway is caught in the blast, gets knocked overboard, and ultimately drowns at sea.

Conway is a Caucasian male in his (presumably) mid-twenties with a completely shaved head. His standard outfit consists of MTP-camouflaged fatigues, a ranger green-coloured heavy plate carrier, and a customised Enhanced Combat Helmet (ECH).

In contrast to the more stoic Adams, Conway bears a standoffish personality and will loudly voice his disapproval of anyone; often to chagrin of his superiors. He especially bears a dislike for both the AAF and in particular its leader, Georgious Akhanteros, and looks down on them as being uncivilised.

Conway also harbours a close friendship with Adams, though the latter constantly pokes fun at Conway by making him carry out various (and often ridiculous-looking) training activities in front of the recruits. Nonetheless, the two remain good friends and work more along the lines of equal partners rather than as subordinate and leader. 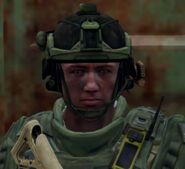 Conway (left) argues with an AAF trooper over their mishandling of suspected FIA collaborators.