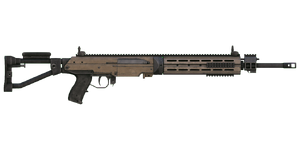 The Cyrus is a 9.3 mm marksman rifle used exclusively by CSAT forces in ArmA 3. It was added with the release of the Marksmen DLC.

The Cyrus is a gas operated, selective-fire marksman rifle chambered to fire the 9.3×64 mm round.

It loads from 10-round box magazines, and can attain a fire rate of up to 300 rounds per minute with a muzzle velocity of 870 m/s. The Cyrus supports being mounted with accessories on its top, side and underbarrel rails, and can be fitted with muzzle attachments.

Designed to supplement the lighter Rahim, it is an exceptionally powerful rifle used by CSAT sharpshooters. Compared to its NATO counterpart, it fires a harder hitting and larger 9.3 mm round which has many advantages (and disadvantages) over the MAR-10's smaller-sized .338 Lapua Magnum round.

The Cyrus' 9.3 mm round hits significantly harder at close-medium ranges due to being much larger, and is also strong enough to penetrate heavy body armour or light defilade. However, it suffers from having poor flight characteristics which can cause it to lose most of its power the further the round travels.

This significantly reduces both its effective range and accuracy, making it almost redundant in its role as a marksman rifle as it cannot reliably take out targets that are located at distances of 600-700 metres and beyond.

Being a selective-fire weapon, the Cyrus also has the ability to fire in full auto as opposed to semi-automatic as well. However, the Cyrus' recoil is rather difficult to handle in this mode, and combined with its already small magazine capacity means that it is best to switch to full auto fire only in close quarters. Otherwise, most rounds will most likely miss their targets and leave the operator vulnerable to enemy fire while they reload.

Note that at distances about of 1,400 metres, rounds from a Cyrus will have slowed down enough to become subsonic. At this distance, a shooter using a suppressed Cyrus becomes exceedingly difficult to locate, and it even becomes difficult to recognise that bullets are striking nearby aside from the faint sounds of bullet impacts near the target.

The Cyrus can only be loaded with a single magazine type. It has a "mass" value of 16 units:

Box magazine loaded with 9.3 mm rounds. Does not have any visible tracers loaded.