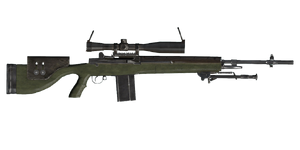 The DMR is a 7.62 mm designated marksman rifle used exclusively by the U.S. Marines in ArmA 2.

The DMR is a gas operated battle rifle with a rotating bolt that is chambered to fire the 7.62×51 mm NATO round.

It loads from 20-round box magazines, and can attain a rate of fire of up to 600 rounds per minute with a muzzle velocity of 900 m/s. The DMR is only available in a single model that is fitted with a sniper scope that has a magnification strength range of 5x-14x and has a (non-functional) bipod attached beneath the barrel.

The weapon of choice of U.S. Marine marksmen and Force Recon operatives, the DMR is an all-round decent sharpshooter weapon. Unlike its U.S. Army counterpart, the DMR's use of a sniper scope allows the operator to reliably engage targets at distances of up to 800 metres by default.

However, the DMR is not a selective-fire weapon and is restricted to semi-auto only. Its scope is quite cumbersome and lacks a backup sight, further hampering its usefulness in close quarters. With no enhanced vision optics like the M110 or a suppressor for stealth missions, its utility is niche at best and can't be used for much more than sniping in daylight.

The DMR can only load one specific type of magazine. It requires one inventory slot to carry:

Box mag with 7.62 mm NATO ball ammunition. Can be shared with the CZ 805 BREN's B1 battle rifle variant or the M14 marksman rifle.

Does not have any visible tracers.

Sergeants Randolph Sykes (front) and Chad Rodriguez (background) of the USMC Force Recon, callsign 'Razor Team'. Sykes (in the foreground) is armed with the DMR.