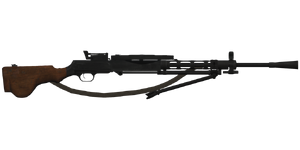 The DP-27 is a 7.62 mm light machine gun used exclusively by the Viet Cong in ArmA 3. It was added with the release of the S.O.G. Prairie Fire Creator DLC.

The DP-27 is a gas operated, magazine fed light machine gun that is chambered to fire the 7.62×54 mm round. It utilises a long stroke gas piston located beneath the barrel, operating a bolt with two side-mounted locking flaps.

It feeds exclusively from 47-round pan magazines, and can attain a fire rate of up to ~ 689 rounds per minute with a muzzle velocity of 860 m/s.

DP-27s cannot be fitted with optical scopes, suppressors or bayonets. They feature an integral bipod and adjustable ironsights. The ironsights can be zeroed starting from a minimum of 100 metres up to a maximum of 1,200 metres. Adjustments are made in increments/decrements of 100 metres.

The DP-27 (High) is a static defence version of the handheld DP-27.

It is mounted onto a raised tripod which can be swivelled in all directions horizontally, but is limited to a vertical elevation/depression angle of 25 degrees.

Static DP-27s feed from the same 47-round pan magazines and have access to a pool of seven to reload from (providing a total ammunition count of 329 rounds).

However, it should be noted that unlike handheld DP-27s, the rounds fired from these magazines retain a slightly greater velocity of 900 m/s as opposed to 840 m/s.

Disassembling the turret will break it down into two components: the weapon itself, and the tripod. Static DP-27s cannot be constructed using the handheld weapon even if the user has a tripod on their back, as the static and handheld versions are not interchangeable with one another.

There are two types of DP-27 magazines available, though it depends on whether the weapon is in a handheld or static configuration:

One visible tracer will be fired for every four rounds of the magazine. Only the last five rounds will consist entirely of visible tracers.

Alternate 47-round pan magazine used exclusively on static tripod-mounted DP-27s. Unlike the magazines loaded by handheld DP-27s, the static counterpart has a higher muzzle velocity of 900 m/s.

The tracer mix has also been adjusted to contain one visible tracer for every two rounds fired instead of four, though the last five rounds will still comprise solely of tracers.