The Dingo 2 CZ is an MRAP-class vehicle used exclusively by Czech military forces in ArmA 2. It was added with the release of the Army of the Czech Republic DLC.

The Dingo is an all-terrain, MRAP-type Infantry Mobility Vehicle (IMV) that is primarily designed to serve as a troop carrier, though it can also fulfil reconnaissance, command and control, and cargo transport duties.

Armament
It is armed with either a 7.62 mm medium machine gun or 40 mm automatic grenade launcher that is fitted to the roof-mounted FLW 100/FLW 200 Remote Weapons Station (RWS) turret.

The turret's optics have the ability to switch between regular "day", night, and black/white hot thermal vision modes. Both weapons can be zeroed up to a maximum distance of 1,000 metres.

Features
A relatively rugged MRAP, the Dingo's layout is fairly straightforward. Its engine and power pack is placed at the front of the vehicle's body, while the crew compartment is located in the centre, and a small cargo section is set at the rear.

The Dingo's chassis is fitted with an armoured body that is specifically designed to provide its passengers with a high level of protection from small arms fire, light anti-tank weapons, as well as anti-personnel mines and Improvised Explosive Devices (IEDs).

Drawbacks
In spite of its configuration, the Dingo remains just as susceptible to larger anti-vehicle weapons and will be quickly destroyed if it takes too much damage. As a wheeled vehicle, the Dingo is also easier to immobilise since its tyres can be burst by gunfire.

Crew Capacity
Including the driver, the Dingo has a maximum seating capacity of five personnel. It can transport up to four passengers at a time, but one passenger doubles as the vehicle's gunner (they operate the control terminal for the RWS turret in the rear). 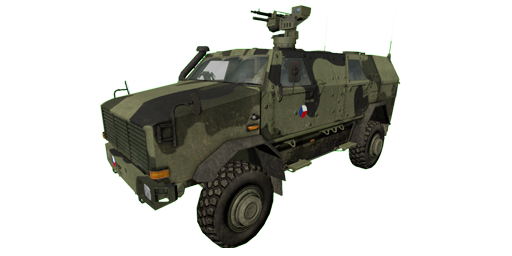 The RWS turret placed atop the roof of the vehicle is armed with a 7.62 mm medium machine gun. The RWS MMG comes pre-loaded with a single 100 round belt box of 7.62 mm ammunition, and has another three boxes left in reserve.

Can transport up to four passengers. 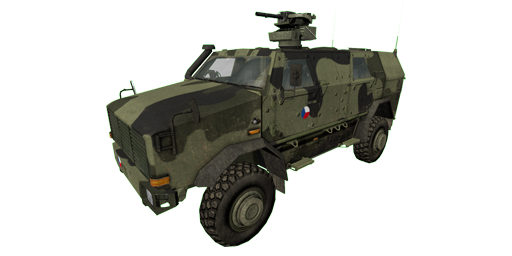 Identical to the baseline MG variant but the RWS is armed with a 40 mm automatic grenade launcher instead. The GMG feeds from a pre-loaded 48 round grenade belt, and has three more belts spare (for a total of 192 grenades).

Transports the same number of passengers as the MG variant.

All Dingo variants have base armour values of 40.

The hull can resist up to 40 points of damage.

The engine can only survive 20 points of damage. A damaged engine will prevent the Dingo from being able to attain its top speed.

The fuel tank can incur just 5.6 points of damage before rupturing. Any damage will cause the tank to gradually leak fuel.

The wheels on all Dingo variants can take a meagre 6 points of damage. Destroying them will not affect the Dingo's "health" pool.

The RWS turret on all variants can incur 32 points of damage. Disabling the turret will "lock" its rotation/elevation but does not prevent its weapon systems from being fired.

The gunner position remotely operates the turret mounted atop all Dingo variants.

For rotation/elevation limits, the turret can be freely adjusted in all directions horizontally but has a maximum elevation of 60 degrees and a depression of 25 degrees. The turret's camera has variable zoom capability and can toggle between regular day, night or black-hot/white-hot thermal vision modes:

It fires grenades with high-explosive (HE) warheads and can attain a fire rate of 150 rounds per minute with a muzzle velocity of 240 m/s. Dispersion is always fixed at 0.006 rad regardless of range. Reloading a new grenade belt takes up to 6 seconds to complete.

The GMG can be zeroed starting at a minimum range of 100 m up to a maximum of 1,000 m. Adjustments are made with increments/decrements of 100 m.

It can attain a fire rate of up to 800 RPM and requires 5 seconds to reload a fresh belt. Accuracy-wise, it has a fixed dispersion of 0.0012 rad regardless of distance.

Zeroing ranges are identical to those available on the GMG.