As part of the U.S.-led NATO coalition's Operation Arrowhead, Hladik served alongside the humanitarian aid groups operating in the Green Sea region nation of Takistan.

Following the success of the initial stages of the invasion, U.S. forces were able to seize the key airbase of Loy Manara in the Central region's south. The Doctor was amongst the group of aid workers and news reporters being ferried in via military cargo planes to spearhead their aid efforts.

However on its final approach to the airbase, the plane was struck by surface-to-air missiles fired by enemy ground forces. The cargo plane's engines were knocked out, and it was brought crashing down into the militia-held valleys north of the airbase.

Hladik, along with three others are the sole survivors of the crash. Dazed but not fatally wounded, Hladik would soon be dragged off by Takistani Army soldiers and their militia allies.

They were brought to a nearby coltan mine close to the city of Feruz Abad, and underwent interrogation at the hands of Takistani government forces.

One of his compatriots on the flight - news reporter Joe Harris, died at the hands of the Army officials while undergoing interrogation. Hladik and the other two survivors however, were dragged off yet again to another undisclosed location before U.S. forces could locate the mine.

Though Hladik was constantly threatened with death by their captors, they were generally treated "decently" nonetheless. Even so, he knew full well that it would only be a matter of time before the Takistanis executed them in retaliation for the coalition's continued victories. Fortunately, Hladik and his fellow survivors are eventually rescued by U.S. troops after they eliminate their guards.

Hladik informed the Americans that they were the only survivors of the crash, and thanked them for their efforts. He gratefully offered to buy the squad leader a round of drinks should he ever choose to visit Prague.

Following the aftermath of the U.S.-led invasion, Hladik continued to work with the local authorities and humanitarian aid groups over the course of four more weeks. He and a group of other Czech doctors ran a small clinic out of the village of Falar, in the remote areas of Central Takistan.

However, local bandits stole the group's medical supplies in the hopes of selling them on the black market. The Doctor was less than pleased and to make matters worse, remnants of the former regime had planted an Improvised Explosive Device (IED) in the heart of Falar's marketplace. Hladik could only appeal to the NATO forces in the region, and wait for them to send help his way.

Fortunately hours after making his request, British Army paratrooper Sergeant Brian Frost and the rest of his squad, Lancer Red, passed by Falar to investigate the Doctor's reports. Thanks to Sgt. Frost, the IED's triggerman is discovered and killed by the troopers before he could detonate the IED. Hladik later asked the members of Lancer Red to pass on his request to meet with the Sergeant.

Hladik met with the paratrooper and informed him about their missing supplies. Sgt. Frost agrees to help Hladik retrieve Hladik's vehicle - which was carrying the medicine, from the bandits out in the nearby hills. The trooper returned soon after with the supplies intact, and handed over the cache to the Doctor.

Immensely thankful for the trooper's assistance, Hladik made sure that he would return the favour to the Sergeant. He first offered to contact his fellow colleague - Dr. Hrabec, in nearby Sakhe who held good relations with the local Takistani police commander. If Frost ever needed assistance, they would be the first to respond to their aid.

At the same time, he also told the Sergeant to visit another of his colleagues in Feruz Abad; aid worker Rita Ensler, for some more HUMINT on insurgent activity in the region. As Frost's unit mounted up onto their vehicles, Hladik wished them luck and safety on their patrol to the city.

A Czech male in his early thirties, Hladik has a ginger head of hair and sports a medium beard. His usual apparel consists of a brown-coloured shirt, a white vest emblazoned with the LMN aid group's logo, white trousers and hiking shoes.

A casual and light-hearted individual, Hladik easily made friends with those he worked with. He got on well with the locals in spite of the language barriers, and was equally respected in turn for his steadfast willingness to help. Hladik particularly enjoyed drinking, and would often have up to fourteen beers in a single session. 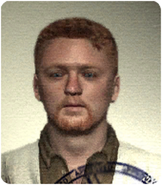 Profile mugshot, as seen in the briefing for Coltan Blues.