The ED-1 Mini UGV is a family of tracked, multi-purpose robotic drones used by several BLUFOR, REDFOR and INDFOR factions in ArmA 3. It was added with the release of the Contact DLC.

This small tracked electric robot is built to traverse complex terrain, and can transmit a live camera feed so that its operator can remotely assess the situation.

Features
Wielding its multi-joint swivel arm, the UGV's two primary uses are Chemical, biological, radiological and nuclear defence (CBRN) and Explosive Ordnance Disposal (EOD). For example, the Science variant; the ED-1E, is essentially a mobile mini-laboratory with sensors, a sampling laser and a biopsy probe.

On military variants, the ED-1D model comes prepared with a mounted disruptor shotgun ideal for demining operations and close quarters as a defensive shotgun.

Last but not least, both variants can be disassembled into a "backpack" form for ease of transport. The user can then unpack either model and quickly deploy it into the field.

Mobility
Powered only by batteries, no variant of the ED-1 possesses much mobility and can only reach an absolute maximum speed of 15 km/h (averaging at 12 km/h in most cases).

Thanks to its tracks, the ED-1 can climb up steep inclines with relative ease compared to its larger cousin. At the same time however, making a simple manoeuvre like rotating the chassis to face another way can be quite a nuisance since the entire drone will need to shift itself to do so.

Drawbacks
Only ED-1D variants retain armament in the form of a 12 gauge shotgun. However, this shotgun is not intended for actual combat and is only helpful as an absolute last resort. It is restricted to semi-automatic fire, has a delay in-between each volley, and neither of its shotshells are particularly useful against anything other than infantry targets or landmines.

Though the drone itself is surprisingly quite resilient to small arms fire (both UGVs can survive an entire magazine's worth of hits from 6.5 mm bullets), the same cannot be said for explosives or grenade launcher rounds. Lastly, enemy drone operators can simply avoid getting within range of the ED-1D's shotgun and hack it, turning them against their original controllers with deadly results. 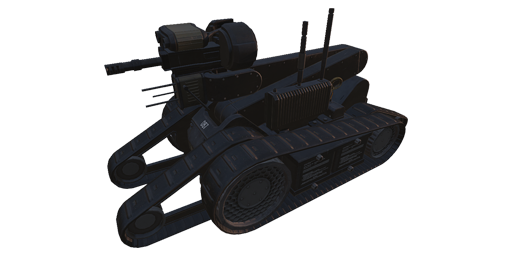 The ED-1D's "arm" is fitted with a disruptor shotgun which holds 15 pellet and slug rounds along with a built-in mine detector that can detect explosives, buried mines, Improvised Explosive Devices (IED) and Unexploded Ordnance (UXO) from up to 50 metres away.

Exclusive to CSAT forces. Identical in capability to the NATO/AAF/LDF ED-1D. 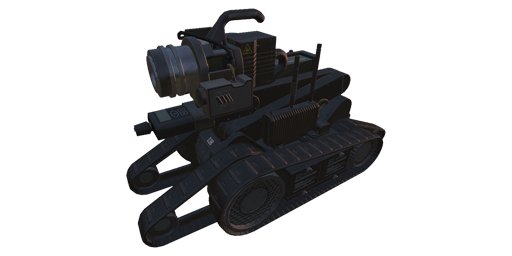 It is fitted with various onboard sensors, a sampling laser and a biopsy probe.

Exclusive to CSAT forces. Identical in capability to the NATO/AAF/LDF ED-1E.

Both functionality and armament are identical to mil-spec ED-1D variants.

Both variants of the ED-1 Mini UGV possess base armour values of 30. Neither model can be fitted with Explosive Reactive Armour (ERA) blocks/panels or slat cages.

The following highlighted positions serve as weak points on ED-1s:

Positions remain identical on all drone variants regardless of configuration.

Hull damage is calculated based on the integrity of other components on the ED-1. Until all other parts of the drone have been critically damaged, the hull itself can never be "destroyed".

All variants of the ED-1 have twin battery packs which power the drone and serve as its "fuel" supply. Each pack can only survive meagre 15 points of damage before destruction. Destroying both will not affect the ED-1's main "health" pool.

If damaged: No effect on drone operation.
If destroyed: Drone loses all power and can no longer move (arm operation remains unaffected).

The drone's engine can take up to 30 points of damage before failure. No amount of damage is transferred onto the ED-1's "health" pool.

If damaged: Significant decrease to mobility.
If destroyed: Instantly immobilises the drone.

The drone's tracks can resist only 15 points of damage. No amount of damage is shared with the drone's "health" pool. Destroying either track is usually sufficient to impair the ED-1's ability to move.

Only the ED-1D has access to electronic sensors in the form of a mine detector:

NOTE: Only the D variant of the ED-1 is equipped with a mine detector.

The ED-1D is able to sense the location of buried landmines and IEDs within a 360 degree radius and at a maximum distance of 50 m from the drone's current position.

Unlike other types of sensors, there is no azimuth or elevation restriction.

The drone's "gunner" AI on both variants handles all weapon systems. For optics, the arm camera has access to day, night and green-hot thermal vision modes:

NOTE: Only available on ED-1D variants and the Demining UGV.

12 gauge shotgun module. Used to disarm explosives and landmines from a distance. Can fire either regular pellet or slug-type shotshells.

It can attain a fire rate of up to 100 rounds per minute. Neither "magazine" can be reloaded once depleted unless the operator rearms the drone at a nearby supply crate/logistics vehicle. Accuracy-wise, both have an identical dispersion of 0.0014 rad at distances of between 300 and up to a maximum of 800 metres away.

However, it should be noted that both munitions are highly inaccurate at those ranges - resulting in the Disruptor Shotgun having a real effective firing range of less than 300 metres.

NOTE: Only available on the ED-1E.

Scans the target for biological information. The laser beams cannot harm the target in any way.

The scan requires constant lasing of the target in order for the system to complete its scan. The process will automatically be cancelled if the operator stops lasing the target.

NOTE: Only available on the ED-1E.

Needle probe used to gather samples from biological objects. The probe can be extended once every 0.25 seconds.

Unlike the Sampling Laser, the Biopsy Probe can harm organic targets but will require repeated prodding with the probe before any serious injuries can occur. Vehicles are completely unaffected, though tyres can potentially be burst with continuous jabs.