The FGM-148 Javelin is a 127 mm anti-tank missile launcher featured in both ArmA: Armed Assault and ArmA 2. 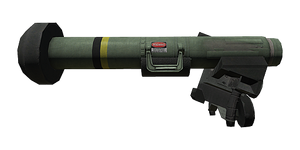 It can only load 127 mm missiles fitted with high-explosive anti-tank (HEAT) tandem warheads, and is capable of striking ground targets at ranges of up to 2,000 metres. The launcher is fitted with a Command Launch Unit (CLU) that can toggle between two magnification zoom modes.

Designed to burn through the heavy armour of Main Battle Tanks, the Javelin is an extremely powerful (but cumbersome) AT weapon that can instantly destroy most non-MBT vehicles in a single hit.

As the sole shoulder-launched ATGM in Armed Assault, the Javelin naturally possesses many advantages over the shorter-ranged and unguided M136 rocket launcher. Whereas the latter only provides the user with a simple ironsight to aim with, the Javelin's CLU features an optical sight that can zoomed in and out at the press of a button.

Damage-wise, the HEAT missile can inflict almost twice the amount of damage of the RPG-7V's PG-7VR grenade. Lastly, the Javelin is more than capable of hitting vehicles at more than three times the maximum firing range of either launcher, which makes it the premier AT launcher in Armed Assault.

The Javelin Launcher only supports one type of missile. It requires six inventory slots to carry:

The missile is always launched with an initial velocity of 5 m/s and takes a further 5 seconds to reach a maximum speed of 200 m/s in flight. The warhead has a blast radius of 2 metres. 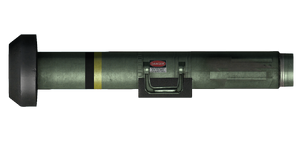 The FGM-148 Javelin is used by both the U.S. Marines and U.S. Army forces, as well as with the British Army in ArmA 2.

The Javelin still serves as the heavy AT launcher of U.S. military forces, as well as with the British Army where it is used alongside the smaller and lighter NLAW.

It continues to load 127 mm missiles fitted with tandem HEAT warheads, and is capable of striking ground targets at distances of up to 2,000 metres. The launcher's CLU has a magnification strength of 2x, but can now toggle between normal day, night, and black/white-hot thermal vision modes.

When it comes to raw firepower, the Javelin is unrivalled even when compared to its shoulder-launched Russian counterpart. It doesn't need to be manually guided to its target, and only requires three seconds to acquire and lock onto any ground vehicles with an active infrared signature.

Once launched, the Javelin's missile is almost always guaranteed to score a hit, even if the target activates defensive smoke countermeasures.

Despite all its strengths however, the Javelin also possesses several drawbacks that prevent it from being used against anything other than MBTs. For starters, each missile takes up to six inventory slots to carry which basically restricts the Javelin to a single-use, unless the operator decides to forgo carrying ammunition for their primary weapon altogether or if there is a second team member ready to haul an extra missile.

Secondly, the Javelin's HEAT warhead is designed specifically to punch through vehicle armour and has a very tiny blast radius on impact. It also cannot be guided manually via SACLOS, which makes it practically useless against infantry since the user cannot accurately gauge the distance to a target manually, unlike the MAAWS rocket launcher which has a step-scope reticle for this purpose.

Lastly, the Javelin uses an arched flight trajectory as opposed to a straight one like the NLAW, which makes missing targets that are at close distances (under 150 metres) very likely. This is because it tends to overfly its target at such ranges, and will not be able to change its heading in time before impacting onto something else other than its intended target.

Regardless of these downsides, the Javelin still remains as the premier heavy AT weapon in ArmA 2. There is simply no better substitute for the Javelin at doing what it does best: turning enemy tanks into scrap metal. In a defensive position with plenty of missiles to spare, a single Javelin team can put a stop to any armoured offensive with ease.

The missile is soft-launched and takes at least 0.3 seconds for its motor to ignite. The motor will continue gaining thrust (starting at 20 m/s) over the course of 5 seconds to gain a top speed of 430 m/s. The warhead itself has a blast radius of just 2 metres.