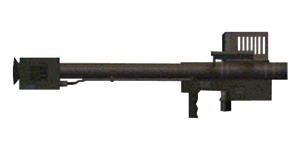 The FIM-92 is a portable, shoulder-launched, surface-to-air missile launcher.

It is designed to launch missiles fitted with high-explosive fragmentation (HE-Frag) warheads, and has an effective range of between 400 and up to a maximum of 1,200 metres. The FIM-92's sight is not magnified and uses a dual-circle reticle for aiming.

The FIM-92 is the standard issue SAM launcher of the U.S. Armed Forces. It is serves as a short-ranged, infrared-guided SAM launcher that is optimised for taking down helicopters and fixed-wing aircraft.

Each missile is quite heavy to carry and takes up to six inventory slots. This prevents its user from being able to carry more than one missile at a time, and essentially turns the FIM-92 into a single-shot weapon.

Despite this drawback, the FIM-92 is extremely effective against every aircraft in Cold War Assault, with a single hit usually being more than enough to bring down (if not outright destroy) any helicopter or jet.

The Stinger can only load one type of missile. It occupies six inventory slots:

Missiles are always hard launched with an initial velocity of 30 m/s. They take a further three seconds after launch to reach a top speed of 350 m/s in mid-flight. The warhead itself has a blast radius of 2 metres. 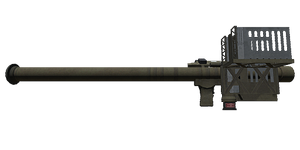 The FIM-92F Stinger is used by both U.S. Army and RACS military forces in ArmA: Armed Assault.

The FIM-92F is an updated model of the older FIM-92A Stinger model. Like its Cold War Assault predecessor, it remains as a man-portable, infrared-guided SAM.

The Armed Assault FIM-92F continues to use 70 mm missiles fitted with HE warheads. Function-wise, it is still a fire-and-forget IR-guided launcher, though its maximum lock-on range has been increased to 2,500 metres instead.

When it comes to performance, the FIM-92F isn't that much different to its SLA counterpart aside from the Stinger missile's HE warhead being slightly more powerful. This is generally unnoticeable in actual gameplay however, as a single missile is always enough to severely damage almost every helicopter or jet upon impact.

The Stinger is only able to load and fire one type of missile. It requires six free inventory slots:

Missiles are hard launched with an initial velocity of just 5 m/s. They will continue to gain speed 2.5 seconds after launch until they reach a maximum of 800 m/s in mid-flight. Their warheads have a blast radius of 7 metres. 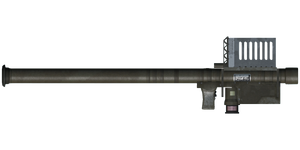 The FIM-92F Stinger is used by several BLUFOR and Independent factions in ArmA 2.

Returning from Armed Assault, the FIM-92F continues to serve as the primary SAM launcher used by both U.S. troops and now, the British military, Chernarussian guerilla fighters, and PMCs as well.

It has several improvements over its predecessor from Armed Assault; namely increased range (it has a maximum lock-on distance of 4,800 metres), better manoeuvrability for the Stinger missile itself, as well as improved resistance to countermeasure flares.

The FIM-92F's utility also extends to mounted weapons fixated onto certain vehicles such as the HMMWV Avenger and M6 Linebacker.

Once more, the FIM-2F remains as the BLUFOR counterpart to the 9K38 Igla SAM used by the Russian Armed Forces. It relies on IR guidance to track targets like the 9K38, is highly resistant to infrared countermeasures, has a similar operating range, and utilises missiles with high-explosive fragmentation (HE-Frag) warheads that occupy up to six inventory slots at once.

However, in terms of actual performance the FIM-92F is slightly inferior to its modern Russian counterpart in two ways. Unlike the 9K38, the FIM-92F's maximum range caps out at 4,800 metres compared to the former's maximum of 5,200 metres. The Stinger missile itself is also less agile, and can be completely outmanoeuvred by nimbler or fast fixed-wing aircraft like the Su-34.

While the FIM-92F cannot match the 9K38 directly in those aspects, it is far superior to the older Russian-made 9K32 in every way and remains as a reliable SAM launcher.

FIM-92Fs can only be loaded with one type of missile. Each missile requires six free inventory slots to carry:

Missiles are soft launched with an initial velocity of 40 m/s. The missile's motor will ignite 0.25 seconds after leaving the tube, and will continuing gaining speed over a period of 2 seconds until it reaches a maximum of 750 m/s.

The seeker has a 20% chance of losing lock to countermeasure flares, while the warhead retains a blast radius of 8 metres.