The FN FAL is a 7.62 mm battle rifle featured in both ArmA: Cold War Assault and ArmA 2. 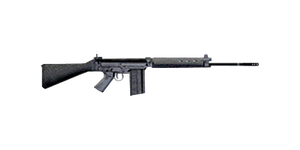 The FN-FAL is used by the FIA as well as by their Nogovan Partisan predecessors in ArmA: Cold War Assault.

The FN-FAL is a gas operated, selective fire battle rifle with a tilting breechblock that is chambered to fire the 7.62×51 mm NATO cartridge.

Obtained from covert American arms shipments during the Soviet occupation of Nogova, the FAL is one of the two battle rifles that are exclusively utilised by the Nogovan Partisans and their counterparts on Everon. It combines both stopping power and range thanks to its usage of the 7.62 mm NATO round.

Due to being a battle rifle, it suffers from fairly high recoil but this can be slightly mitigated by firing on semi-auto. It should also be noted that although it is chambered to fire the same round (and is mechanically similar in a few ways) to the G3A4, the FAL is unable to share magazines with the latter and vice versa.

The FN-FAL only supports one magazine type. It occupies one inventory slot:

20-round box magazine loaded with 7.62 mm NATO ammunition. Does not contain any tracers. 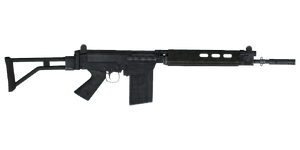 The FN FAL is used by several REDFOR and INDFOR factions in ArmA 2. It was added with the release of the Operation Arrowhead expansion pack.

Returning in ArmA 2, the FAL remains mostly identical to its Cold War-era predecessor save for the addition of a night vision scope-equipped variant.

It still loads from 20-round box magazines but has had its muzzle velocity increased to 900 m/s. However, its fire rate has been reduced to only 771 RPM. The FAL lacks sub-variants with accessories or muzzle attachments, but does have a dedicated model fitted with a night vision scope.

It is chiefly used as the main service weapon of both the Takistani Army and its allied milita groups. The FAL is also used in more limited numbers by anti-government opposition groups and is also the favoured weapon of some private military contractors.

A rugged battle rifle, the FAL possesses a balance of good stopping power and range, being able to reliably strike targets at distances of up to 400 metres away. Depending on the user's skill, it is entirely possible to hit targets as distant as 700 metres.

Nonetheless, despite its use of the heavier 7.62 mm NATO round, the FAL itself is not a particularly accurate weapon regardless of its range advantage over its 5.45 mm and 5.56 mm counterparts. Not only that, it also has much more noticeable recoil compared to other 7.62 mm-chambered battle rifles in its class.

This is especially apparent with the likes of the U.S. Army's M14 rifle for example; not only does the latter lack a magnified optic just like the FAL, but it has better accuracy over medium ranges and is easier to control in confined spaces.

The FAL supports only one type of magazine. It will occupy one inventory slot:

20-round box magazine loaded with 7.62 mm NATO ball ammunition. Does not contain any tracers.