Flashpoint is the name of a reoccurring musical theme which has been used throughout the ArmA series.

Beginning with ArmA: Cold War Assault (then-known as Operation Flashpoint: Cold War Crisis), Flashpoint has since been remixed for every subsequent main title in the series with the exception of ArmA 2. The track was initially composed by Ondrej Matejka. Reoccurring elements include a contemporary/classical intro accompanied by other instruments depending on the era of the game.

In Cold War Assault, Flashpoint serves as the game's main theme and is used at multiple times throughout the main campaign (usually during intro cutscenes).

An alternate remix of the theme was also used for the ninth track, and is titled as Secret.

Black Ops is the title of Armed Assault's remixed Flashpoint. It is the sixth track and to match the series' jump into the modern era, incorporates an extended, metal-themed, two minute-long second half.

An alternate version of Black Ops is titled as Flashpoint Rearmed (the second track), and is essentially a rerecording of Cold War Assault's Secret.

Composed by Jan Dusek, ArmA 3's rendition of Flashpoint is now titled as This Is War and partially incorporates electronic elements to the theme to suit the near-future setting. Three altered and slightly shorter versions are used for the main menu and certain in-game sequences (suffixed as a, b and c).

This Is War has the most sub-variants of Flashpoint thus far. Remixes were made for the release of the:

To celebrate its sixth year of release, a special edition of This Is War was unveiled on September 12th, 2019. It is titled as This Is War - 6th Anniversary Remix. 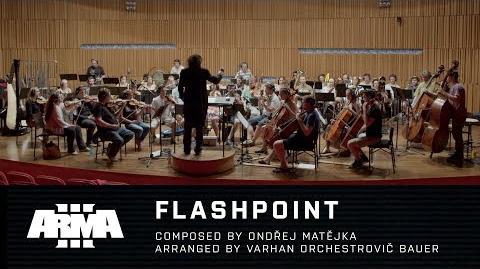 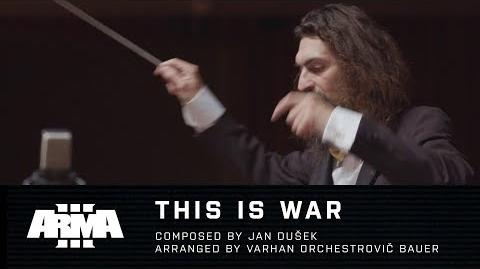 Arma 3 - Musical Birthday Card "This Is War - 6th Anniversary Remix"
Add a photo to this gallery
Retrieved from "https://armedassault.fandom.com/wiki/Flashpoint_(music)?oldid=51846"
Community content is available under CC-BY-SA unless otherwise noted.